Dick Enberg was an American sportscaster. Over 60 years of his career, he provided play-by-play of various sports for several radio and television networks, which include NBC, CBS, ESPN, as well as for individual teams, such as UCLA Bruins basketball, Los Angeles Rams football, California Angels, and San Diego Pardes baseball.

Dick Enberg had an estimated net worth of $16 million. He died on December 21, 2017, in La Jolla, California, from a suspected heart attack. He was 82.

He was born on January 9, 1935, at Mount Clemens, Michigan, United States. There is no proper information about his parents but he has stated that his father was from Finland and his surname was translated from Finnish ‘Katajavuori’ to Swedish equivalent ‘Enberg’ by him. The surname means ‘Juniper Mountain’.

He did his schooling nearby Armada and then joined Central Michigan University for his Bachelor’s degree.

He was interested in sports from his early days and used to play the college baseball. Later, he enrolled in Indiana University to get his Master’s and Doctorate degrees in Health Sciences.

While he was in Indiana, he voiced the first radio broadcast of ‘Little 500’ and was also the play-by-play announcer for Indiana Hoosiers basketball and football games.

He was also appointed as assistant professor and baseball coach at Cal State Northridge.

He started as a full-time sportscaster in 1960s working for KTLA television and KMPC radio. He has worked for various television networks such as NBC, CBS, and ESPN and so on.

Moving on to his personal life, he was a married man He married to Barbara Hedbring. The couple tied a knot in 1983 and is blessed with 3 beautiful children. They have a son named Ted Enberg and two daughters named Nicole and Emily. However, Babara was not his first wife. He was prior married to Jeri Taylor in 1959. Later in 1975, the couple took a divorce due to some personal differences.

Dick Enberg had an estimated net worth of $ 16 million. The sportscaster also worked as the Chairman of the American Sportscaster Association and the Board member of the Lott IMPACT Trophy, which is given to the college football’s Defensive IMPACT Player of the Year annually. 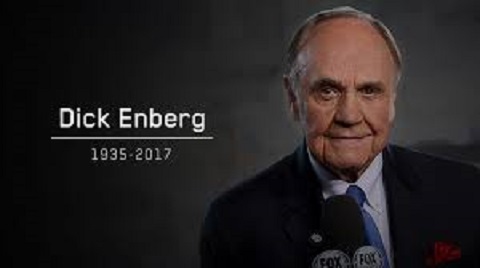