Desmond Ridder is an American football quarterback. He is one of the good prospects for the 2022 NFL Draft. He finished his collegiate career for the  University of Cincinnati, earning 2× AAC Offensive Player of the Year and Birmingham Bowl MVP (2020).

Louisville, Kentucky native, Desmond Ridder was born on 31st August 1999, under the star sign. The twenty-two years old holds an American nationality and is of white ethnic background. He stands 6 ft 4 in (1.93 m) tall and weighs 215 lb (98 kg).

He enrolled at Holy Family Parochial school and then transferred to o St. Xavier High School. He passed for 1,319 yards and 9 touchdowns as a senior at St. Xavier.

Rivals.com rated him as a two-star and  24/7 Sports a three-star.

Over an offer from Eastern Kentucky, he committed to the University of Cincinnati for his collegiate career.

Desmond redshirted his true freshman season. He was the starting quarterback as a redshirt freshman for the Bearcats. He passed for 2,445 yards and 20 touchdowns and gained 583 yards rushing along with 5 touchdowns and was named the American Athletic Conference (AAC) Rookie of the Year.

The following season, he completed 179 of 325 passes for 2,164 yards and 18 touchdowns against nine interceptions while also rushing for 650 yards and five touchdowns.

The junior season (2020) was a breakthrough for Ridder: being named to the Walter Camp Offensive Player of the Week as well as the  Davey O'Brien National Quarterback of the Week.

Though, he declared for the 2021 NFL Draft, later he opted to return for his redshirt senior season.

Ridder won the Davey O'Brien National Quarterback of the Week (second time in his career) after the No. 7 Bearcats defeated No. 9, Notre Dame, on the road.

Desmond Ridder is in a relationship with Claire Cornett. On 5th July 2019, Ridder made his relationship public, posting his girlfriend on IG.

On 2nd November 2020, Ridder took Instagram to announce that he and his girl going to be parents soon. He wrote, "Beyond grateful and blessed to announce that we will be having a Baby Girl in our future I’m so excited to start our family and spend forever together #girldad." 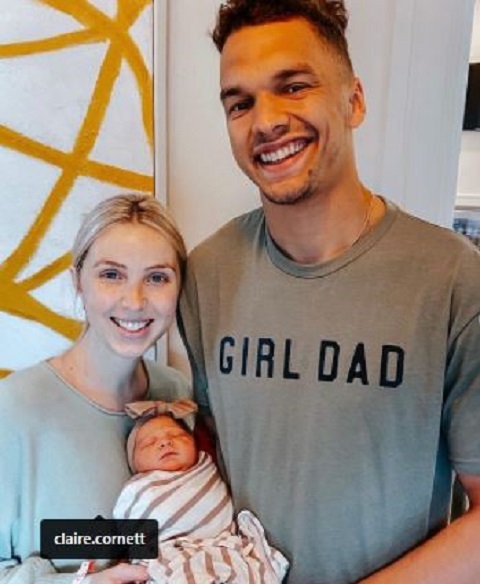 In April 2021, the couple welcomed their baby girl and named her Leighton Elizabeth Ridder.

"Everyone, please welcome Daddy’s little Princess and my pride and joy Leighton Elizabeth Ridder to this wonderful world... You are loved to the moon and back," Ridder Wrote on his Instagram.

How Much Is Desmond Ridder's Net Worth In 2022?

Desmond has just finished his collegiate career playing for the Cincinnati Bearcats. As a matter of fact, NCAA does not allow the college to pay their college athletes. However, NCAA in 2021 introduced new rules: making money through endorsements, sponsorships, merchandise, and social media.

As of 2022, Desmond Ridder's net worth is under review.