Denys Popov is a professional football player from Ukraine who currently plays in the Ukrainian top league, the Ukrainian Premier League. He plays in the defender position for FC Dynamo Kyiv where he has been playing since 2017. He wears the Number 4 Jersey for his team.

He won the 2020-21 season, he won the Ukrainian Premier League while also winning the Ukrainian Cup in the same season. He is a 3 times Ukrainian Super Cup winner having won it consecutively in the 2018, 2019, and 2020 seasons.

Denys Yuriyovych Popov, famously known as Denys Popov was born on February 17, 1999, in Myhiya, Mykolaiv, Oblast, Ukraine. According to astrology, his birth sign is Aquarius. 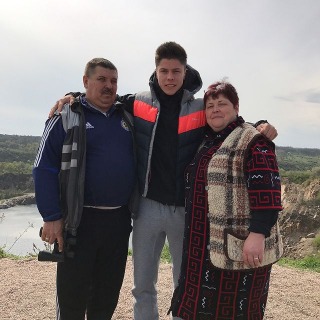 Denys Popov with his mom and dad SOURCE: [email protected]

He was born to his Ukrainian father and mother whose exact names are not revealed yet. But he sometimes shares their picture on his social media. As per him, his parents are the dearest to him and he loves them very much.

Read: Who is Maximilian Arnold? Who are his parents?

He began playing football at the early age of 10 years old.  His first youth club was RVUFK Kyiv where he played until 2014. After that, he moved to the youth team of Dynamo Kyiv.

He has been playing for them since. He got promoted to their senior team in the 2017 season.

What is the height and weight of Popov?

His weight is around 81 kg and has short black hair.

What is the Net worth and Salary of Denys?

Denys Popov is a very young player who is at the start of his career. But he has already started in the top club of Ukraine. He has been able to earn heavy wages from his career of playing. He earns about $300,000 per year with his current club. And as per sources, his net worth is estimated to be more than $800,000 approximately.

Besides the average salary, his earnings also come from sponsorship deals. His major sponsors include brands like Adidas and Puma. He frequently promotes his sponsors through his social media.

According to transfermarkt, his market value in 2022 is estimated to be 3 million pounds.

Is D Popov dating anyone? His Relationship Status

Deny Popov is not a single person who is currently in a relationship with his partner. He sometimes shares his photos with his girlfriend on his Instagram.

In August of 2021, he posted a photo where he was seen with a ring and his girl was with a flower, of course, given by Denys. It seems he proposed to his partner. 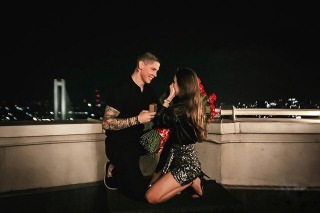 He is currently not married but must be planning on getting married to his current girlfriend.

Popov is active on Instagram with the username @popov19 where he has more than 58,000 followers.