DaVonte Lambert is an American defensive tackle who played college football at Auburn. The 6 feet 2 inches defensive back is currently a free agent, but during his playing time, Lambert gave his best and helped the team to win various matches. Furthermore, Lambert has played for some teams and has also participated in some games.

Georgia native DaVonte Lambert is a professional defensive tackle who is now a free agent. He has an amazing skill and has given the best performance during his playing career. Apart from that, Lambert played high school football at Burke County (Ga.) before heading to junior college. As we know, Lambert played for some teams, and he was also considered one of the best defensive tackles.

DaVonte Lambert was born on June 23, 1994, to his parents in Keysville, Georgia. As of early 2022, he is 27 years old. His father's name is Tammy Lambert, while his mother's name is missing from the public domain. Talking about his family background, he is the grandson of Margie Grant.

For your information, Lambert is not only the child of his parents as he grew up together with his two siblings, both brothers named Carlos Lambert and Benjamin Smith. The 27-years-old player is pretty private, and he does not come up much in the media talking about his personal life.

Everything On His High School and College Career

As mentioned earlier, Lambert played high school football at Burke County (Ga.). After that, he played college football at Auburn. At Auburn, Lambert majored in Interdisciplinary Studies. He was rated as the No. 1 defensive line prospect in the junior college ranks. In his high school career, Lambert recorded 36 tackles, eight sacks and four fumble recoveries in leading Georgia Military College to the 2012 NJCAA national championship match. As a freshman playing for Coach Bert Williams, Lambert tallied 27 tackles, two sacks and seven TFLs. Also, he earned area defensive player of the year honors while leading the Bears to the 2011 Class AAA state championship. In the year 2014, Lambert played in 11 games with nine starts.

His first start came at Kansas State, where he recorded a sack, 1.5 TFL, and two tackles. As we know, he had participated in various games and once, he got into a serious injury. In a match against Samford, he suffered a knee injury that needed surgery. In the 2015 season, Lambert had a decent career. DaVonte Lambert in one of his games SOURCE: Twitter @AUGoldMine

Similarly, he played with the St. Louis BattleHawks of the XFL in 2020. Not to mention, Lambert had his contract ceased when the league suspended operations on April 10, 2020. After that, he got an offer from another team, and on April 30, 2020, he got a deal signed with the Carolina Panthers. However, he was waived on August 28, 2020. Since then, he has been a free agent.

How Much Are His Salary and Net Worth?

Lambert has played for some teams, and with them, he had an amazing deal. So, we can say that his income during his playing career was massive, but the current salary remains unknown as he is a free agent. According to Spotrac, Lambert signed a one-year, $675,000 contract with the Carolina Panthers, which also included an average annual salary of $675,000.

Likewise, Over the cap reports his career earnings to be around $813,000. Considering all the facts, we can say that his net worth is somewhere around $500,000 to $800,000. But the actual amount remains under investigation as Lambert has not given a hint regarding his income at the moment. For your information, Defensive tackles have an average revenue of $2,625,000 and a median wage of $847,300. So, it can be said that Lambert might have earned in the same range during his active career. 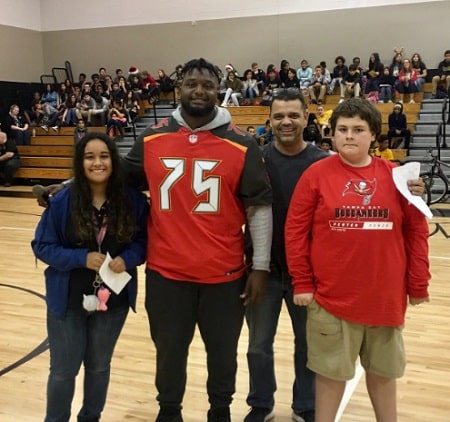 Apart from being an athlete, now he might be engaged in other business and might be making a living through it. The current status of Lambert is unknown as he has kept himself away from media prominence for a long time.

Relationship Status: Does Lambert Have A Girlfriend?

Like many other athletes, Lambert also falls under the same category and prefers to keep his personal life secret. So, due to his secretive nature, we are unable to mention the details regarding Lambert's love life. As Lambert has kept himself away from the media, none of the outlets have been able to collect information about him.

So, we can speculate that Lambert is single and is leading a solitary life now. Not only that, but Lambert does not have much activeness on social media, making it more challenging to know about his love affair. Till now, he has never been involved in controversies regarding his relationship. So, he might be busy with his work and schedule.

As his fans and well-wishers are eager to know about his love affair, Lambert may give some updates in the future. There are some details about his family life, so we can say that Lambert is a family person who wants to spend much of his spare time with them. If he gets married or is in a relationship, then the verified sources of Lambert himself may give a break some news in the future. Meanwhile, his career details are easily available on the internet.

In addition to that, Lambert is a verified user of Twitter where he is available as @DaLamb89. From his Twitter account, Lambert gives updates on his work but he does not reveal much about his life. Also, Lambert has kept his account private at the moment.