David Vanterpool is an American professional basketball coach who is currently serving as an assistant coach of the Minnesota Timberwolves of the National Basketball Association (NBA). A former player, he went undrafted in the 1995 NBA Draft but had a quite successful career in Europe earning an All-EuroLeague Second Team selection during the 2003–04 season, while with Montepaschi Siena.

Hails from Daytona Beach, Florida, David Vanterpool was born on 31st March 1973, under the star sign Aries. He holds an American nationality and is of Afro-American ethnic background. Further, the forty-eight years old stands 6 ft 5 in (1.96 m) tall and weighs 200 lb (91 kg).

How Much Is David Vanterpool's Net Worth In 2021?

David Vanterpool has summoned a good deal of money through his basketball career both as a player and a coach. Overall, he had 11 seasons as a player playing in United States, Europe, and Asia. Not as NBA but players earns a quite impressive salary playing overseas. Vanterpool is assumed to earns at least $3 million from his playing career.

Coming to his coaching career, NBA does not reveal the salary of assistant coaches. Currently serving as associate head coach at Minnesota Timberwolves, his annual salary is somewhere between $0.3 million to $0.5 million.

It's unknown if David Vanterpool is married or not. The basketball coach has not disclosed any information about him being married nor anyone has spotted in the games who is assumed to be his wife. 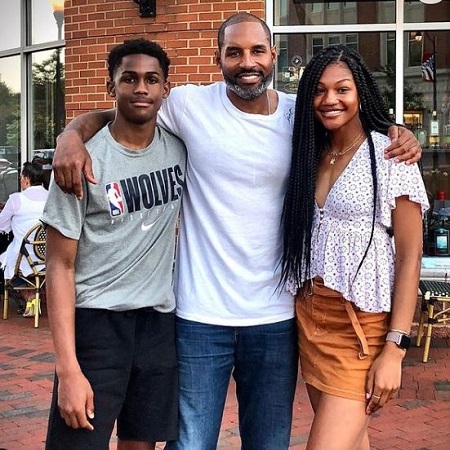 But one thing for is sure, David Vanterpool is a father of two:  son Devin Vanterpool and daughter, Kendel Madison. He often shares pictures with his children on his official Instagram account. However, he has never posted the mother of his children.

He went undrafted in the 1995 NBA Draft, so he was picked in the Continental Basketball Association (CBA) draft by the Quad City Thunder.

He made his professional debut playing for Nuova Gorizia. In 1996, he flew to China to play for Jilin Northeast Tigers, where he remained till 1999 and returned to the United States. He spent 1999-2001 with Yakima Sun Kings. also played in 22 games with the Washington Wizards of the NBA, in the 2000–01 season, and with the ABA's Kansas City Knights, in the 2001–02 season.

In 2002, Vanterpool joied the Italian club, Scandone Avellino and then Montepaschi Siena. From 2005-07, he played for the Russian club, CSKA Moscow.

After retirement as a player, he resigned to CSKA Moscow as an assistant coach in 2007. In 2012, he moved back to United State and joined Portland Trail Blazers where he served until 2019. Since 2019, he is serving as an associate head coach at Minnesota Timberwolves under the head coach, Chris Finch.