Carlos Darwin Quintero Villalba is a Colombian professional footballer who plays for the Major League Side (MLS) Houston Dynamo. The forward is also recognized by his nickname of El Científico del Gol (The Goal Scientist). A professional since 2006, he played for Deportes Tolima, Krylia Sovetov, Deportivo Pereira, Santo Laguna, America, and Minnesota United.

With 14 years of a professional career in football, Darvin has summoned a tremendous sum of money. As of 2020, his net worth is approximately $3 million.

Darwin Quintero is a married man. He tied the knot with his long-time girlfriend, Valentina Sierra, in September 2008. The couple has two daughters: a son, Darwin Jr, and a daughter, Martina. Though Darwin and his wife Valentina are yet to come out in the public with their love story, there is plenty of their pictures on their respective Instagram which allusion their story. 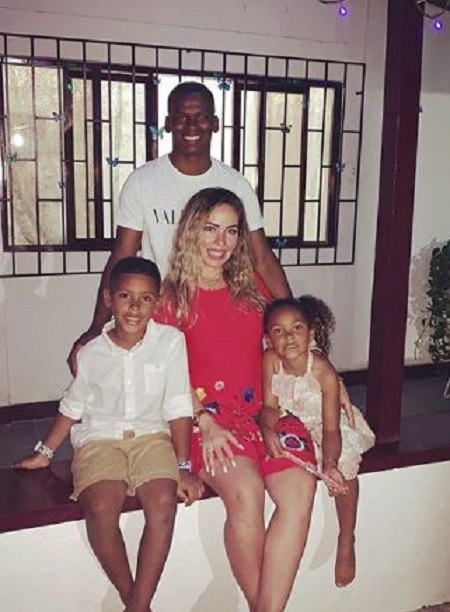 Darwin Quintero with his wife and children SOURCE: Instagram @darwinquintero31

Besides, Darwin has his son’s name on his cleats and special shin guards. It’s all mainly for family. Every time he goes out on the field, te play for their family before anything else.

At the age of five, Darwin moved to Cali, living in the Puerta del Sol district with his father and sister. He said, he always wanted to pursue a career in football as long as he can remember, claiming to have letters from when he was seven starting his career goal.

Quintero started his football career with Panaderia Kuty training school and Barsa Futbol Club. In 2004, he joined the youth system of Deportes Tolima. In 2006, he made his professional debut with Deportes Tolima and his first goal for the team came on 19th February 2006 in a 3-2 victory over Boyaca Chico. The following year, he joined Krylia Sovetov and Deportivo Pereira in 2008. Similarly, he had 225 competitive games with 66 goals for Santos Laguna between 2009-2014.

On 16th December 2014, he agreed to a deal with Club American with a transfer fee of $10.3 million, breaking the Liga Mx transfer record. For the team, he played 107 games with 17 goals in total. On 31st March 2018, he arrived at MLS side Minnesota United a as Designated player, becoming the first in the club's history. On 14th April, he made his debut for the team in a 3-2 loss to the Portland Timbers alongside Kevin Molino. On 13th November 2019, he was traded to the Houston Dynamo.