Darren McCarty is a retired professional ice hockey forward best known for his years playing with the Detroit Red Wings of the National Hockey League (NHL). During his playing career, he has won multiple awards including Stanley Cup which he won on the year 1997, 1998, 2002, and 2008 respectively.

Darren is quite unpredictable in the field and also on real life. He was previously married to his first wife Cheryl until their divorce in 2012. Want to know more about their relationship? then scroll down

Darren McCarty Personal Life; Know about his Wife and Children

Darren McCarty was once married to his college sweetheart, Cheryl. Besides, the duo seemed happy together and they were also blessed with 4 children; Griffin, Emerson, Avery, and Gracyn McCarty.

Darren reportedly had an extramarital relationship with Sheryl Sirmons which Cheryl found before their divorce in 2012. Cheryl then divorced Darren in 2012. The details regarding the divorce are yet to be disclosed. 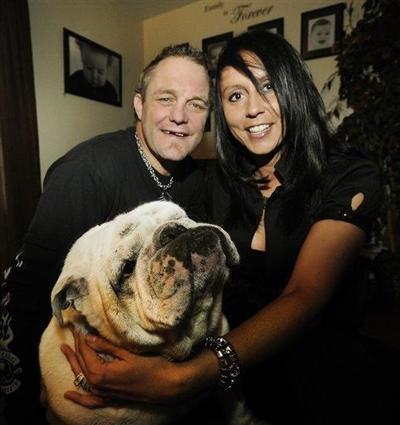 Besides, Darren during his offseason acts as the lead singer for hard rock band "Grinder" which has been in hiatus with the sudden passing of their bass player and friend, James B. Anders from cardiomyopathy.

Darren McCarty stands a perfect height of 6 feet 1 inch tall and has a bulky body that weighs about 219 lbs (99 kg). Talking about his appearance, he has a fair skin tone with a pair of blue eyes. Further, his hair color is brown and also has brown facial hair and mustache.

Darren McCarty Net Worth and Earnings in 2019

Apart from that, Darren has added a lot of property in his name. Unfortunately, he doesn't like to show his properties to the public and media.

Darren McCarty was born on April 1, 1972, in Burnaby, British Columbia, Canada. McCarty spent most of his childhood in Burnaby. He was born to Canadian parents and thus holds Canadian nationality. Talking about his ethnicity, he is of Caucasian ethnic group.

McCarty's father, Craig, was diagnosed with multiple myeloma, an incurable cancer of the bone marrow and blood, in 1995. In 1997, Darren McCarty established the McCarty Cancer Foundation to raise funds to finance research for a cure for this type of cancer.

Darren McCarty spent much of his childhood growing up in the small town of Leamington, Ontario, playing for the Southpoint Capitals (OMHA) minor teams.

On November 23, 2009, McCarty made his debut as an NHL Analyst for Versus. McCarty made occasional appearances on the Versus post-game show, Hockey Central. McCarty served as a fill-in co-host on WXYT-FM (97.1 The Ticket) in Detroit.