Darius Philon is an American professional football player who plays in the National Football League (NFL). As of 2019, Darius Philon currently plays for the Los Angeles Chargers as their Defensive Tackle and has previously also played for San Diego Chargers.

Philon currently earns an annual salary of $600,147 from Los Angeles Charger and has an estimated net worth of over $1 million. The details regarding his current relationship status are not disclosed yet.

Kept aside Darius Philon financial earnings, his personal assets includes home and cars.  Further, the NFL Player Darius Philon earns a good amount of money from various sponsorships. He was also fined an amount of $20,054 for roughing the Passer against Russell Wilson

The detailed information regarding the current relationship/affair status of Darius is yet not disclosed on media but there are rumors that he broke up with his former girlfriend. The details about his ex-girlfriend are not available. Philon mentioned that he broke with his girlfriend after quitting his military job.

So far he hasn't posted about his love affair or personal life on his social accounts since he always keeps his personal life low-profile and also there is no information claiming that he is a married man.

Despite his popularity in the sports field, he is also a famous social media star celebrity with a huge number of fan followers on his official social accounts. Darius Philon is not only a world-class athlete but also has a very attractive individual.

Talking about his body measurements, he has a height of 6 feet 1 inch and weighs about 136 kilograms with his black hair color.

Darius Philon was born on January 22, 1994, in Mobile, Alabama, United States but the details regarding his parent, siblings, and family life is still not available. As per his nationality, he is American and belongs to Mixed ethnic group and his star sign is Aquarius.

Darius began his NFL career with the San Diego Chargers after being drafted in the sixth round overall pick. After his injury, he was paced under reserve but was later reactivated on December 12, 2015. 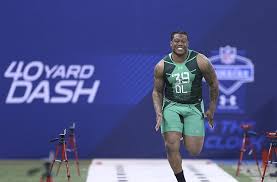 Currently, he is playing alongside Keenan Allen who is playing as the wide receiver and another famous quarterback Philip Rivers.