Darian DeVries is a well-known American college basketball head coach. He has been working as the head coach of Drake University since 2018. Darian spent almost two decades working as an assistant coach at the Creighton University. DeVries led his team in the MVC regular-season final in 2019 and has won the MVC Coach of the Year Award Twice.

Darian DeVries was born Darian Dale DeVries on April 7, 1975, in Aplington, Iowa. He among the two children born to his parents. Darian has a younger brother Jared Jay DeVries, a former American football defensive end and played his entire professional career for Detriot Lions. After graduating from High School, Darian enrolled at the University of Northern Iowa and completed his undergraduate in 1998. 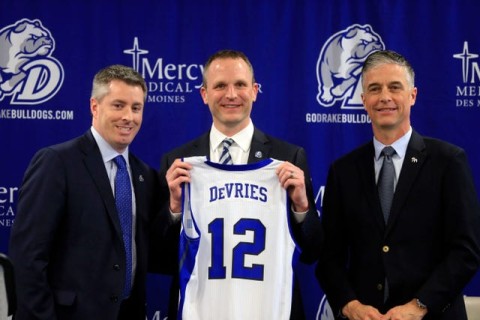 Daran has an estimated net worth of more than $2 Million. As per sources, DeVries has an annual salary of $334,706. He receives a hefty sum as a bonus and incentives. Although Darian is one of the rising and successful head coaches, his earnings do not match his qualifications.

Who is the Wife of Darian DeVries? Know About His Married Life

Darian is a married man. He is married to Ashely Danielle for more than two decades. The love birds tied their wedding knot in the late 1990s. They had been dating each other for some time before their marriage. She is a native of Eldridge, Iowa. Shortly after the wedding, Darian and Ashley welcomed their first child, a son, Tucker, in December 2002. 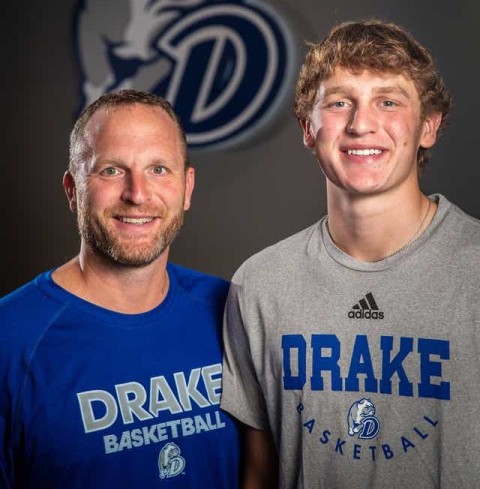 Darian along with his son, Tucker SOURCE: Des Moines

After seven years, In 2009, The former assistant coach opened about expecting a baby. Shortly after that, The pair were blessed with a daughter, Tatum. Tucker is a standout basketball player. The top prospect committed to Drake University, where his father is the coach, in 2020.

In the 2018 season, Drake University hired him as their new head coach. His steady hand at the Bulldogs' helm helped the program start the season with a 9-2 record. In his second year with the team, The head coach filled the void of the trophy-less season when he led the team to the MVC regulars season Championship and won the title in 2019. NCAA awarded him the MVC Coach of the Year award.

In 2020, the Postseason got canceled after the COVID pandemic hit the world. In the ongoing 2020-21 season, DeVries's team has a good season with 15-3 games and holds the second position in the league. In March 2020, He signed an eight years contract with the University.