Dansby Swanson is an American Professional Baseball player who plays in the Major League  Baseball (MLB) for the Atlanta Braves as their Shortstop. Previously, he played for Arizona Diamondbacks after being picked first overall in the 2015 MLB Draft.

Dansby Swanson was born on February 11, 1994, in Kennesaw, Georgia. As per his nationality, he is American and belongs to the White ethnic group. Further, his star sign is Aquarius.

Who is Dansby Swanson's Girlfriend? 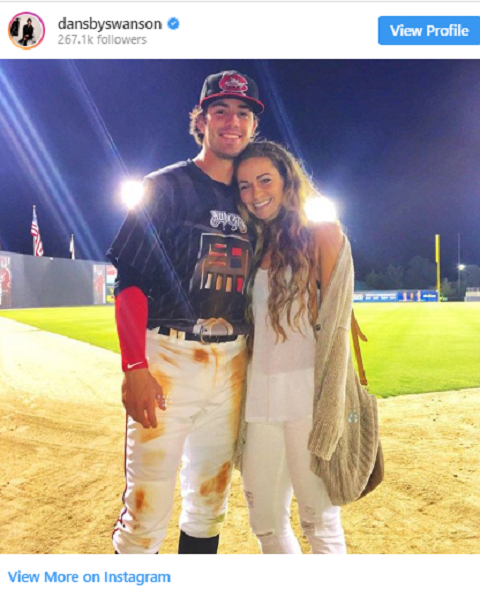 Dansby previously was rumored to be dating Katy Huffman, an advertiser before dating Kara. The couple dated for about two years and were separated.

Swanson's girlfriend Sheftis reportedly the student of Doctor of Physical Therapy at Belmont University. She most recently served as the Student Physical Therapist at Select Medical for three months.

Talking about his body measurements, The Famous MLB star is 1.85 m in height and weighs around 77kg.

How Rich Is Dansby Swanson? Know about his Net Worth And Salary

Dansby Swanson so far has made earnings of $8,279,050 from his entire MLB career While David Price is one of the highest earner in the history of MLB.

What are the Endorsement Deals of Dansby Swanson?

It is obvious for any famous athlete to be involved in endorsement deals. Exploring Dansby's social media accounts, we found that he frequently promotes the product of  Nike.

From the deal, he earns a significant amount of money which will certainly add up an amount to his Net worth in the coming days. He also has his own clothing line named DS7.

Dansby was born to parents Cooter Swanson and Nancy Swanson. He grew up along with his siblings, Chase and Lindsey.

Dansby attended high school in Marietta, where he was playing basketball and baseball. As a freshman, because of a broken bone in his foot and a torn labrum in his shoulder, he played in only 11 games. He was named All-Southeastern Conference as a sophomore in 2014. He was named the Most Outstanding Player of the College World Series after the Commodores beat the Virginia Cavaliers in the 2014 College World Series.

The Diamondbacks traded Swanson, Ender Inciarte, and Aaron Blair for Shelby Miller and Gabe Speier to Atlanta Braves on December 9, 2015. He went 2-4 in his MLB debut on August 17, including his first career hit off Kyle Gibson, Minnesota Twins pitcher.