Daniel Podence is a Portuguese professional football player who is currently signed to the Premier League side Wolverhampton Wanderers as a winger. A full international since 2020, he has earned 1 cap from Portugal's national team.

How Much Is Daniel Podence's Net Worth In 2022?

His current market value is €22 million, last updated on 23rd December 2021. His highest market value to date is recorded €25 million back in 2020.

As of 2022, Daniel Podence's net worth is approximately $5 million.

Daniel Podence is in a relationship with Kayra Biskowski for over a decade. Reportedly, they started dating in 2010.

On 24th August 2020, Podence got down on his knee asking for a lifetime commitment while they were on vacation in Formentera, Isole Baleari, Espana. Kayra said YES! 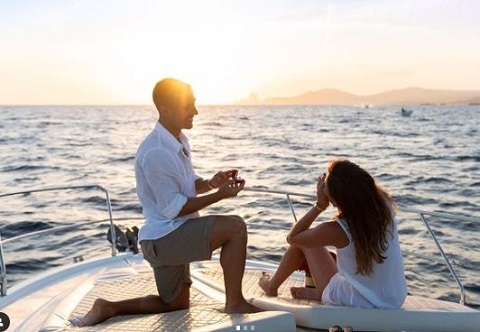 On 9th March 2019, Podence posted a picture with his girlfriend along with a heavy caption. It reads, "9 years is not 9 days... Thank you my love! Besides being a super smart person, friend, responsible, you can be the best girlfriend you could ever have and my great love! How lucky I am. The last year will have been the most challenging but thanks to you we did it. I am forever grateful to you. I love you so much."

On 3rd February 2013, Daniel Podence made his senior debut while still a junior, coming as a late substitute for Bruma in a Segunda Liga match against C.S. Marítimo B.

On 29th December 2014, Podence made his official debut for the Sporting CP first team in a 2-0 away victory against r Vitoria S.C. in the final stages of the Taca da Liga.

For the 2016-17 season, Podence was loaned out to the Moreirense F.C. On 17th Septemver 2016, Podence made his Primeira Liga debut in a 0–2 loss at G.D. Estoril Praia. On 29th October 2016, he scored his first goal against C.D. Tondela in a 2-1 win. On 4th December 2016, he played in a  3–1 win over C.D. Nacional. Further, he played three games for the club in the League Cup campaign, which ended with them winning their first-ever trophy.

In January 2017, Podence was called to his parent club, Sporting CP. On 1st June 2018, he terminated his deal with Sporting CP after a  violent attack on the players by a number of their supporters.

On 9th July 2018, Podence joined Olympiacos agreeing on a five-year deal. On 9th August 2018, he made his debut for the Olympiacos in a  4–0 home victory against FC Luzern in the third qualifying round of the UEFA Europa League. Later that month, in the same competition, he scored his first goal in a 1-1 draw qt Burnley which ended in a 4-2 aggregate win. Overall, he played 42 games with 8 goals from 2018-2020.

On 30th January 2020, Podence signed to Wolverhampton Wanderers, agreeing on a four-and-a-half-year contract for a £16.9 million transfer fee. He made his Wanderers debut in a 0–0 draw with Manchester United at Old Trafford as a substitute.