Regarding his personal life, Kennedy is a married man. As of 2018, his net worth is reported to be $1 million.

Dan Kennedy, 36, is married to his long-time girlfriend Stephanie Kennedy. The duo walked down the aisle 15th December 2013. Later two years, the duo became a proud parent for the first after the birth of their baby, Archery Grey Kennedy on 10th September 2015.

Likewise, on 1st December 2017, the couple welcomed their second child and first baby girl, Neve Stevie Kennedy. If we go through Kennedy’s Instagram account, he has shared adorable pictures with his small happy family.

Net Worth around $1 million

Retired professional footballer, Dan Kennedy has made an enormous amount through his football career. His total disclosed earning from his club career is listed below down the table:

A native of Fullerton, California, Dan Kennedy was born on 22nd July 1982, to Terry Kennedy and Bill Kennedy. As per nationality, Kennedy is an American, having a white ethnicity background. His star sign is Cancer.

Kennedy was raised alongside his sibling Jenny Kennedy. For high school, he enrolled at El Dorado High School in Placentia, California, where he played three years for the school’s varsity football team. Upon graduation, Kennedy attended the University of California and subsequently joined the UC Santa Barbara Gauchos men’s football team.

There Kennedy participated in the championship match of the 2004 NCAA Division I Men’s Soccer Championship, however, lost on penalty kicks. As a starter for UCSB, he played 84 matches in his four-year career.

Also, he played with Orange County Blue Star in the USL Premier Development League during his college year alongside Jurgen Klinsmann and Tony Lochhead.

In the 2005 MLS Supplemental Draft out of UCSB, Dan Kennedy was picked 38th overall in the 4th round by C.D. Chivas USA. However, he did not play for the club rather joined MetroStars as a temporary backup due to injuries to their personnel.

In April 2005, Kennedy signed to Puerto Rico Islander. He represented Islander every minute in the 2005 United Soccer League season and was also named the seasons USL First Division Rookie of the Year.

For the 2007 season, Kennedy was transferred to Primera B de Chile side Municipal Iquique, where he led the team in goals-against average for the season.

In May 2013, Kennedy signed a contract extension with Chivas and Major League Soccer through the 2016 season. Moreover, he finished his Chivas USA career as the franchise's all-time leader in 144 games played, 142 games started, 451 saves, and 28 shutouts.

In the 2014 MLS Dispersal Draft, Kennedy was selected 1st by FC Dallas. Despite playing 14 matches for the club, he became surplus to requirement when Jesse Gonzalez replaced him as a starter.

After the 2015 MLS season, Kennedy was traded to LA Galaxy in exchange for two picks in the 2017 MLS SuperDraft. 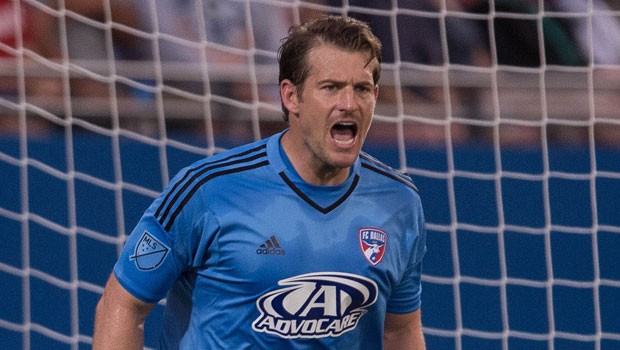