Danny Mack Gable, a.k.a. Dan Gable, is an American former folkstyle and freestyle wrestler who was only the third wrestler to get inducted into the United World Wrestling's Hall of Fame in the Legend category. Further, he held the position of head wrestling coach at the University of Iowa from 1976 to 1997.

Born on October 25, 1948, Gable is a native of Waterloo, Iowa. He carries an American nationality and belongs to a white ethnical background. His birth sign is Scorpio.

The veteran wrestler, Gable, has an estimated net worth of $5 million as of 2022. His wealth highly influenced by his wrestling as well as coaching career. As reported, he had an annual salary of $400,000 during his coaching career.

Gable is a married man. He tied the knot with his girlfriend, Kathy Gable in 1974. The couple shares four daughters Jenni Mitchell(Brian), Annie Gavin(Mike), Molly Olszta(Danny) and Mackenzie McCord(Justin). 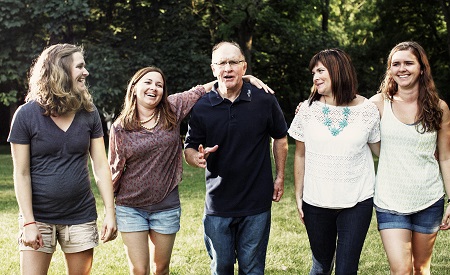 Gable was born to parents who never had cooperation, drastically affecting Dan's and his sister's upbringing. Dan did his high schooling at Waterloo West. During his sophomore years of high school, his sister was sexually assaulted and murdered at the age of 19 by a teenager from his neighborhood.

Though he called his sister's death his biggest loss, he did not allow the tragedy to affect his focus on wrestling. Rather, he thought of it as an even more determined reason to train: He said, “The more you can settle into focusing on what you have and what you would like to do and where you want to go — a positive point of view — the quicker things turn around and positive things start to happen."

Gable enrolled Iowa State University where he competed in folkstyle wrestling from 1967 to 1970. During that time, he became a National runner-up and two-time national champion of NCAA Division I at Iowa State. Gable's college career record was 117-1, with his only defeat to Lee Kemp of the University of Wisconsin in the final match of his final season.

From 1971 through 1973, Gable competed in freestyle wrestling internationally. His career highlights include gold medals at the Tbilisi Tournament in 1971, the World Championships in 1971 and the Olympic Games in 1972. In particular, Gable won all six of his matches at the 1972 Olympic Games, without giving up a point.

From 1976 until 1997, Gable was the University of Iowa's head wrestling coach. Gable's teams accumulated a record of 355–21–5 in dual meetings. He has coached 152 all-Americans, 45 national champions, 106 Big Ten champions and 12 Olympians, including eight medalists. His teams have won twenty-one Big Ten Conference Championships and fifteen NCAA Division I titles.

Kurt Angle and Jordan Burroughs are professional wrestlers from the United States who have also won Olympic gold.