So far Dotson is not married, but he is currently dating his girlfriend Mariahnay Cole. Furthermore, his net worth is estimated at around $1 million, as of 2019.

Damyean Dotson Net worth and Salary

As of 2019, Damyean Dotson has an estimated net worth of around $1 million. From his career as a basketball player, Dotson earns a tremendous amount of $2,478,242. Currently, he plays for the New York Knicks of NBA.

To date, Damyean Dotson is not married. However, he is currently dating his girlfriend Mariahnay Cole who is a singer as well as a model. But the pair hasn't revealed the exact date when they began dating. 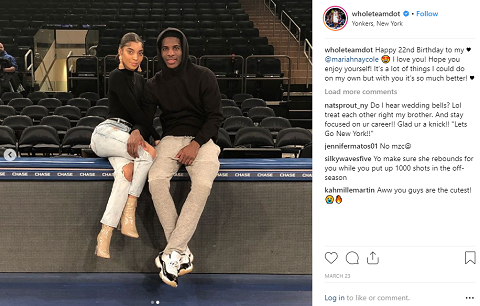 Dotson and his girlfriend Cole are happily enjoying their love life. Dotson frequently shares photos of his partner on his Instagram. Along with their profession, the lovebirds are successfully maintaining their love life too.

Although the duo is dating, none of them have mentioned any plans of getting engaged or married. Besides this, there are no records as well as the rumors of Dotson's other affairs and relationships.

Damyean Dotson was born on 6th May 1994, in Houston, Texas, United States. He was raised by his mother Lorie Dotson. Dotson belongs to American nationality and holds African-American nationality. Since his school days, Dotson began playing basketball.

Find more about: Enes Kanter's Club and International Career; His Properties and Incomes

Before starting his professional NBA career, Damyean Dotson played two seasons for the University of Oregon. However, after sophomore year, Dotson and his teammate Dominic Artis and Brandon Austin were dismissed due to sexual assault allegations but they were never charged due to a lack of evidence.

Later, Dotson played for the University of Houston and was able to make the record of 17.4 points and 6.9 rebounds per game. Moreover, he was further named to the First Team American Athletic Conference. During the 2017 NBA draft, New York Knicks selected him with the 44th pick.

Dotson signed for the New York Knicks on 7th August 2017. He became the eleventh player in history to play in the G League as well as NBA on the same day on 29th December. In a match against the Miami Heat, on 6th April 2018, Dotson scored career-high 30 points and 11 rebounds.