American football quarterback for Dallas Cowboys, Dak Prescott is one of the most notable football figures in the world. He played college football for State Bulldogs and was their starting quarterback from 2013 to 2015 as a rookie.

Replacing injured Tony Romo in 2015's season as a quarterback, he received Offensive Rookie of the Year, and also earned a Pro Bowl selection the year he entered the NFL. To know about his early life, career, net worth, personal life and more, keep scrolling.

Born in the late July, his birth sign is Leo. The American quarterback Dak is of African descent from his father's side and his mother was a white Europian.

Growing up, Dak Prescott attended Haughton High School, Louisiana. At his high school days, he showed his caliber in the game of football. As a senior, he completed 159 of 258 passes for 2,860 yards and 39 touchdowns. He also rushed for 951 yards on 90 attempts with 17 touchdowns.

His college career started in 2011; he was redshirted as a true freshman in 2011. Playing for the Mississipi Bulldogs in 2012, in 12 games Prescott completed 18 of 29 passes for 194 yards with four touchdown and no interceptions. He was in good form in all seasons. After his excellent college years, he was drafted to NBA in 2016. selected by the Cowboys in the fourth round of the 2016 NFL Draft. 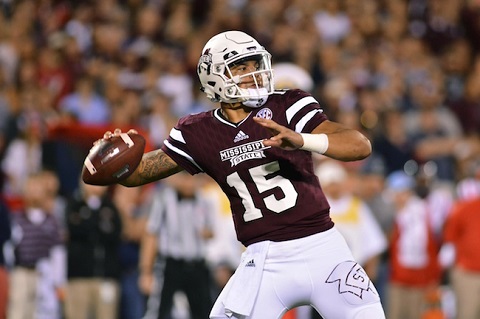 Dak started wearing jersey number 4, to honor his mother's birthday, which is on 4th of September after his mother died of colon cancer in November 2013. He also runs The Faith Fight Finish Foundation which works in helping people dealing with adversity.

Dak Prescott's name was entered in the 2016 NFL Draft. He was picked by The Dallas Cowboys in the fourth round after failing to acquire Paxton Lynch. Though issued #10 at the beginning, Prescott decided to switch to #4 honor of his mother and became the first Dallas Cowboys quarterback to wear the #4 in history. His first debut with the team came in the preseason opener at the Los Angeles Rams. He completed 10 of 12 passes for 139 yards and two touchdowns but Dallas still lost the game 28-24.

Throughout the preseason, Dak Prescott continued to show good results impressing all the veterans. Tony Romo, the starting quarterback suffered from a compression fracture during the 3rd week of the preseason game and had to take time off for his injuries. Prescott was picked to fill in his spot and was selected as the Cowboys started for the beginning of 2016 season.

Prescott's start at a regular-season came on September 11 of 2016 against the New York Giants, becoming the fourth rookie quarterback to open the season as a starter in the history of NFL. Prescott was ranked No.4 among NFL quarterbacks in 2016 which was a huge accomplishment for a rookie. In the 16 games that he started, he had 3,667 passing yards, 282 rushing yards, 29 touchdowns, and only four interceptions and had 67.8% completion percentage He was named the Rookie of the Year with 28 of 50 votes.

The following year, Dak Prescott's second professional season started with a 268 passing yards and a touchdown in the 19-3 victory over the New York Giants. The season turned out to be a difficult season for the Cowboys as they kept facing one setback after another after their first victory over the Giants. Prescott did the best to his ability to keep the team going, but that was still not enough to get the Cowboys to get in the postseason contention. 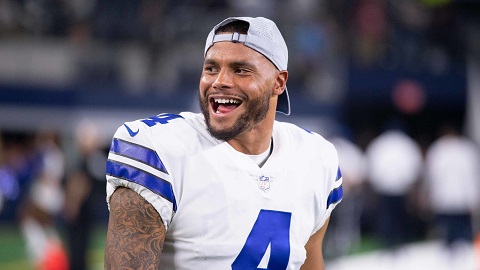 So far in 2018, his stats reveal that Prescott has had 330 passing yards, one touch down and 64 rushing yards. He helped his team defeat New York Giants in a 20-13 victory with 160 yards in 16-of-25 passing. He did not commit a turnover in the NFL preseason game.

He is a private person and has managed to keep his private life secretly. He has never spoken about his affair, family, wife, and girlfriend with his fans. Hence, his fans totally have no any idea about his personal life. He is young, dynamic and focused towards his career. Therefore, we guess that he is not married. He doesn't have a wife or children. However, he was spotted with a girl named Lindsay Davis in the Bahamas. It has been rumored that the two are dating but nothing is confirmed yet. His relationship status still remains a mystery.

Dak Prescott Salary and Net Worth

He is an effective player and he wears a jersey of number four. He enjoys his salary and he paid well by his employer. His total salary advances his net worth. His salary for 2017 was $540,000 and might have the net worth of around $2 million.

Dak Prescott reportedly has career earnings of $2.75M over three seasons. Dak earned $636 thousands in 2017, which is 60th among all NFL quarterbacks and 999th overall in the NFL.

He is around 6 feet and 2 inches tall in height and his weight is 229 lbs. He is followed by his fans on social networking sites. People followed him on Twitter and Instagram. Moreover, info about his life and bio can be taken from Wiki. His playing statistics can be viewed from different sources.