Matthew Polinsky is a popular color commentator, columnist, and retired professional wrestler from the United States of America. Currently, he serves as a color commentator in the WWE Raw, and SmackDown under the ring name Corey Graves. He is a former NXT Tag Team Champion with Adrian Neville. He is also popular for his contribution under the ring name Sterling James Keenan.

Tattooed Matthew Polinsky who is popular as Corey Graves was born on 24 February 1984 and this makes his age 32 years at this time. Pittsburgh, Pennsylvania, United States is his birthplace. He is American by nationality. His ethnicity is white. His star sign is Pisces. He is the son of a Hungarian couple. He received a degree in Marketing from American University.

Corey Graves made his professional debut in 2000. He wrestled under the ring name Sterling James Keenan. Throughout the next few years, he made his appearance for various promotions, including Dory Funk Jr.’s “Funkin Conservatory”, where he competed with Paul London, Adam Windsor, and Onyx.

On September 2005, he landed his steps at the United Kingdom-based 1 Pro Wrestling. On October 1, 2005, he made his debut with a victory over D’Lo Brown.

In August 2011, Matthew Polinsky agreed on a developmental contract with WWE. He participated and performed for Florida Championship Wrestling and WWE’s developmental territory under the ring name Corey Graves.

Career as a Color Commentator

Corey Graves serves as a color commentator alongside Michael Cole and Byron Saxton.

Significance to Corey Graves personal life and biography, he is a married man. He has a beautiful wife in his life. He married his longtime girlfriend Amy in 2011.

Together they have three children (a boy and two girls). Since getting married to till date, the lovely couple is happy in their conjugal life. Corey Graves is loyal to his wife. He does not engage in an extramarital affair. 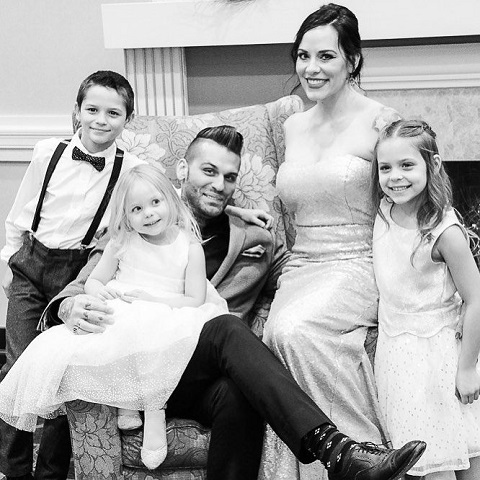 CAPTION: Corey Graves and his wife Amy Polinsky with their child SOURCE: Pinterest

Corey Graves is a professional piercer. He worked in the Naughty Vibrations shop in Greensburg, Pennsylvania and a shop named True Image in New Kensington, Pennsylvania.

He is popular for his tattoos. He got his first tattoo at the age of 16. He tattooed tattoo on his neck and several parts of the body.

Corey Graves Salary and Net Worth

Wrestlers' earnings depend on the league, experience, and promotional ability. According to the league, the average professional wrestler brings home almost $500,000 a year.

As a color commentator on Raw and SmackDown, he earns $400,000 annually. His total salaries and income boosted his net worth. He has an estimated net worth of $600,000.