Bradenton, Florida native, Christian Harrison was born on 29th May 1994, under the star sign Gemini. He is the son of Susie and Pat, a tennis coach. Further, his siblings: brother, Ryan Harrison is an ATP World Tour Player, and his sister, Madison is college students and tennis player.

How Much Is Christian Harrison Net Worth In 2021?

Besides tournament prize money and appearance fees, there are endorsement deals and sponsorships for tennis players. However, Harrison has not disclosed one.

Until 2020, Christian Harrison's love life was completely under the shade but his recent IG post has somewhat eased the public curiosity. On 13th July 2021, he posted a picture of a beautiful blonde kissing him.  The caption reads "First rule of doubles. Pick a good partner." 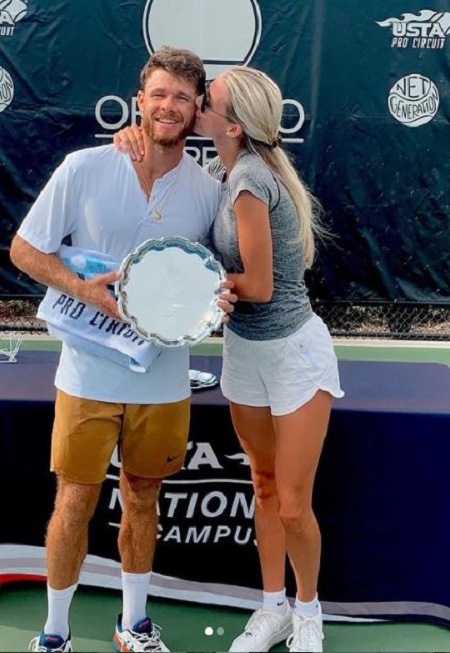 The girl in the picture is Lou Schieffelin, an American model. She is also a Miss Teen Florida 2017.

And yes!! Christian and Lou are officially dating.

In the 2013 season, he made it to the quarterfinals, semifinals, the final, and won, respectively, the four Futures events. Harrison won his first ATP World Tour match against Alejandro Falla at the BB&T Atlanta Open. In the next round, he lost to John Isner in three tight sets.

The 2014-15 season was unfortunate to him: injured with several injuries.

He lost in the first round to Paul-Henri Mathieu in straight sets.

After being qualified for the 2021 Delray Beach Open, he beat number 1 seed Cristian Garin and advanced all the way to the semifinals where he was defeated by fourth seed Hubert Hurkacz.