An American Stock car racing driver and the female NASCAR competitor Chrissy Wallace is the daughter of NASCAR driver Mike Wallace, niece of Rusty Wallace and Kenny Wallace, and the cousin Steve Wallace who are all NASCAR driver. She the first female driver to ever win at Hickory Motor as well as the first woman to win an American Speed Association Late Model track championship at Lebanon/I-44.

The first woman to win an American Speed Association Late Model track championship Chrissy was born on May 15, 1988, in St. Louis, Missouri. The 2011 ASA West Region champion also won the 2008 Kroger 250 in Martinsville.

Chrissy Having a Good Time on Her Vacation SOURCE: Instagram @chrissy

Additionally, she is receiving a good amount of sponsorship from the various endorsements bands but stills, she has not disclosed her actual earning in front of the public.

The 25 years old stock car racing driver, Chrissy seems to be single. It seems like he has devoted her self to propelling the family legacy into Car Racing. She has no records of any type of engagement, affairs, marriage or divorce.

The first female driver to ever win at Hickory Motor Speedway has embraced a career in car racing games and she is adding up some astonishing records in her career stats.

Chrissy belongs from a well-reputed family whose dad Mike Wallace is an American professional stock car racing driver. Chrissy has propelled her family legacy where her father, uncle, and brother all are a well-reputed car racer. She has made her family very proud.

Her uncles Rusty Wallace and Kenny Wallace are the American stock car racing drivers. Rusty Wallace won the 1984 NASCAR Cup Series Rookie of the Year and is the 1989 NASCAR Winston Cup Champion. 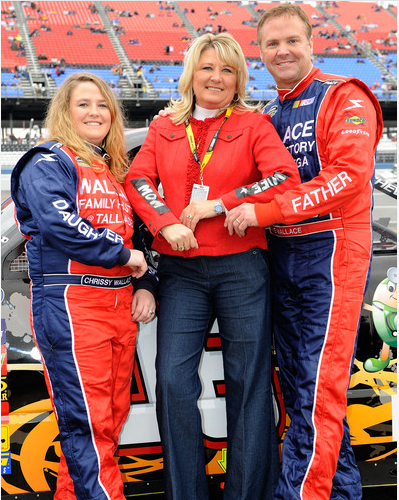 The daughter of NASCAR driver Mike Wallace, Chrissy initiated her career in the racing industry from 2005 and in 2007 she became the first female driver to ever win at Hickory Motor Speedway in North Carolina.

At Martinsville Speedway, She made her NASCAR Craftsman Truck Series debut on 2008, March. Her NASCAR Nationwide Series debut was held in on 2010 in Daytona and she is the first woman to win an American Speed Association Late Model track championship at Lebanon/I-44 Speedway

That was the same track where her father Mike won the championship in 1990.

Some of the famous NASCAR female racers, Chrissy has raced against are Danica Patrick and Shawana Robinson.