Chris McKendry is an American journalist currently working for ESPN as an anchor od Sportscenter since 1996. Besides, she also hosts tennis-related programs like Australian Open, Wimbledon and US Open. on the network. Previously, she was a co-anchor of the 11-1 pm ET weekday block of live SportsCenter shows with Jay Crawford.

The fifty-one-year-old is married and shares two children with her husband. Further, her net worth is approximately $2.3 million.

As one of the popular sports enthusiasts in ESPN, McKendry has summoned a decent salary from the network. Furthermore, she has managed to collect a tremendous net worth with all the experiences and skills.

According to the source, ESPN pays an average salary of $75,766 per year to its employees. As she is experienced one, she is believed to have an annual salary no less than the six-digit figure.

Her estimated net worth is $2.3 million and some sites have claimed it to be around $4 million.

Andrade is a married woman. She tied the knot with her boyfriend, Eduardo Andrade on September 26, 1998, at Most Holy Trinity Church in Pomfret, Connecticut.

The couple first met each other at a bowling alley in Arlington, Virginia and were introduced to each other by the former Olympic swimmer Nancy Hogshead.

They dated together and also had spent some delightful moments with each other. After knowing each other for 3 years, they came to the conclusion of getting married.

Together with her husband, she shares two children.

McKendry was born and brought up in Philadelphia; her date of birth is February 18, 1968. She attended Archbishop Ryan High School; she was always a good and brilliant school.

From an early age, she has shown her keen devotion towards sports, she was a good tennis player. She also got a scholarship at Drexel University. She received her degree from Drexel in 1990.

Following her graduation, she has not wasted her time; she involved herself in a broadcasting sector. She started her professional journalism career for WJLA-TV. She was a sports reporter. She earned a good experience from WJLA-TV. She also worked at ABC. With her short activities in ABC, she moved to ESPN in the year 1996 as a sports anchor. 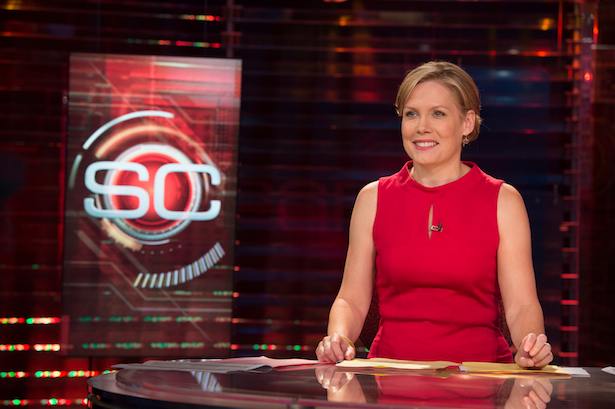 Chris McKendry was appointed to handle ESPN News, however, she managed to move her back in Sports Center and co-host the TV show on the weekend morning and weekday 6 pm.

Being the spectacular host of the show, she has also covered ESPN Wimbledon coverage staying the late night in the network. Besides that, she has been booming in covering several sports including the US Open, FIFA Women World Cup, and others. She co-anchored her final Sports Center broadcast on March 31, 2016. She is actively serving to ESPN and not planning to retire anytime soon.