Chris Mannix is an American sports reporter, radio host, and writer who currently is a senior writer for Sports Illustrated. Furthermore, he serves as a ringside reporter for Fight Night, NBA and boxing insider for NBC SportsTalk, as well as a host of The Chris Mannix Show on NBC Sports Radio. He also provides analysis and reporting for Epix's boxing coverage. Earlier, he served as a senior NBA writer for Yahoo! Sports from 2016–2018.

Boston native, Chris Mannix was born on 30th December 1979, under the star sign Capricorn. The forty-years-old is an American by nationality and belongs to the white ethnic background.

As of 2020, Chris Mannix's net worth is reported $5 million. Not to mention, the significant source of his earning is his career as Sportswriter, reporter, and radio host. 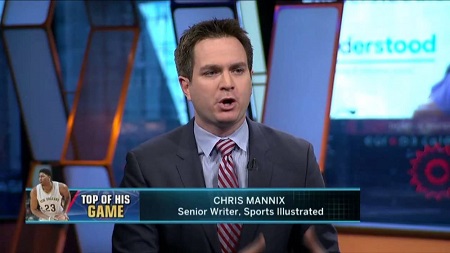 Furthermore, he works as a ringside reporter for Fight Night, NBA and boxing insider for NBC SportsTalk, as well as a host of The Chris Mannix Show on NBC Sports Radio. Mannix is believed to make around $1 million from his different workplace.

It's still unknown if Chris Mannix is married or single. There is less to no information about his affair, girlfriend, or wife. Additionally, there is no single photo on his Instagram and Twitter, which hints his love life. It seems Mannix is a private person who prefers his life low key.

Mannix was raised in Boston by his parents alongside his brother. However, he has not disclosed much information about his family background, not even their names.

He earned a Bachelor of Arts degree in English from Boston College in 2003 and graduated from Boston College High School in 1998 (which makes him a double Eagle). As a teenager, Mannix was a locker room attendant with the Boston Celtics for eight seasons (1995-2003) and covered high school sports for the Boston Globe.

Mannix has covered the NBA since he arrived at SI in 2003. He currently writes columns and profiles in the magazine and for Sports Illustrated and also works as Sports Illustrated's NBA draft expert. Among the NBA stars, he has profiled: Chris Bosh, Russell Westbrook, and Andrei Kirilenko.

Boxing is also one of Mannix's specialties. He has reported for SI on several championship fights. In 2012 he won the 2012 Boxing Writers Association of America's awards for Best Feature over 1,750 words and Best Feature under 1,750 words.

Additionally, he serves as host of The Chris Mannix Show on NBC Sports Radio (Sundays 6–9 p.m. ET). He is a ringside reporter for Epix and Fight Night on NBC and NBC Sports Network.