Chet Holmgren is a rising American college basaketball player. He has been playing in the West Coast Conference for the Gonzaga Bulldogs. He was a consensus five-star recruit and one of the highest-ranked players in the 2021 class. Chet currently plays as a Center Forward for his team.

Chet Holmgren was born on May 1, 2002, in Minnepolis, Minnesota. He is among the two children born to David Holmgren and his wife. His father played basketball for the University of Minnesota Men's basketball team. Holmgren graduated from Minnehaha Academy and has committed to the University of Gonzaga. Chet stands seven feet and weighs 88 kgs.

At the end of the season, Chet emerged as one of the highest-ranked players in the 2021 class. Holmgren recorded nine points in his junior year, ten rebounds, and 12 blocks in a nationally televised victory over Sierra Canyon School. He finished the season with an average of 14.3 points per game. For his senior year, The player won the Class 3A state title, his fourth state championship at Minnehaha. At the end of his senior year, Holmgren was named into several awards, including Naismith Prep Player of the Year and Morgan Wootten National Player of the Year.

During his junior year, Chet received more than thirty scholarship offers from the Universities. In June 2020, after the reclassification of Jonathan Kuminga, he became the number one player in the 2021 class. In April 2021, Holmgren mentioned playing for the Gonzaga University Men's basketball team.

Chet does not like to share much of his personal information with the public. Although He is an active social media user and keeps sharing photos and videos in his timeline, most of them are filled with his games and friends. Chet seems to be living a single happy life. He is very much early in his career and shall be waiting for the right time and right person for his life.

Chet is yet to start his professional career. He is just going to start his college career. Chet shall be earning a huge sum from his career in basketball. Holmgren is sure to land one of the highest contracts and will be making millions. 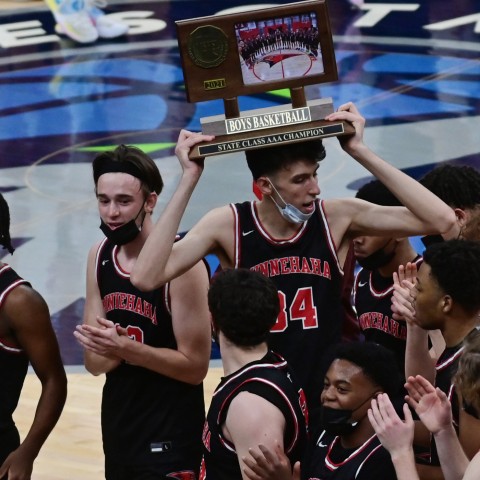 Chet and his friends along with the basketball tournament trophy.SOURCE: The Slippers

Holmgren won't be earning a penny from his college to play for their college team. As per NCAA rules, Universities are not allowed to pay their players for the game. Instead, Universities provide them with scholarships to cover their expenses.