Cheick Guillaume Ouedraogo is commonly known as Cheick Kongo. The Frenchman is a heavyweight mixed martial artist and kickboxer who competes in Bellator, having previously signed to the Ultimate Fighting Championship. He currently trains with Quinton Rampage Jackson and formerly Michael Bisping at the Wolfslair MMA Academy.  As of January 12, 2019, he is #11 in the world rankings by Sherdog.

As of 2019, Kongo's net worth is approximately $1 million. Neither married nor in a relationship, he is possibly single,

Cheick Kongo Income and Net Worth

The 44 years old mixed martial art fighter's has a net worth of $1 million. According to various sources, Cheick Kongo's net worth has grown significantly in 2019. However, the numbers vary depending on the various source.

Currently signed to Bellator, he earns decent sum through his fight. At Bellator 172, he defeated Oli Thompson and received the paycheck of $75,000. He also had a bout against Vitaly Minakov where he earned $50,000 despite his loss.

On his UFC career, Kongo used to get around $300 thousand for each fight but different sources come up with different figures. Thus it is not clear how much he has earned during his MMA and UFC career. However, as per some source, he made the career total of $1,253,000 in UFC.

Much of Kongo's personal information isn't made public that includes his parent's name and his siblings. As of now he still isn't married and now and there we hear rumors about him being gay.

Born in Paris, France to a Burkinabé ethnicity father and a Congolese mother on May 17, 1975, he began his martial art training since he was 5 years old and got to black belt.  By the age of 19 Kongo also trained in kickboxing, Muay Thai, and Greco-Roman Wrestling.

Kongo was coached by Charles Joussot and Frank Ropers when he was 23, he learned the skills of Pencak Silat style of Setai Hati Terate. He is also a columnist for the French magazine, Top Flight.

Kongo's career began on June 10, 2001, by knocking out Doug Ward and followed up with a TKO win over Dave Van Der Veen.

At his UFC 61 debut doctor had to stop the fight while Kongo was beating Gilbert Aldana by TKO but after one more fight, he lost his first MMA fight to Carmelo Marrero at UFC 64. He fought at UFC 92 on December 27, 2008, beating former Cage Rage British Heavyweight champion Mustapha al-Turk by TKO.

Defeat against Cain Velasquez at UFC 99 was a bittersweet experience for Cheick as winning the fight would have given him a title shot at UFC 100 against Brock Lesnar or Frank Mir. However, he got the chance to fight with Mir but lost the by a submission. 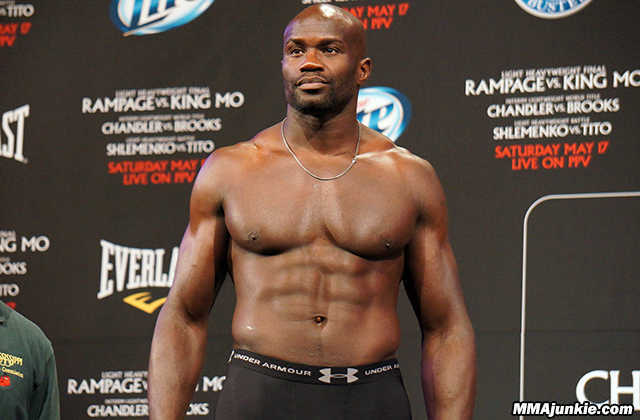 Before UFC 159 the UFC offered Kongo a 4-fight deal, which he turned down and on April 27, 2013, Kongo faced Roy Nelson at UFC 159 but lost the fight via knockout in the first round which followed his release from UFC as his contract expired.

On May 4, 2013, Kongo stated that he is still in good terms with the UFC and he is open to the possibility of resigning a contract with the UFC. He then moved to Bellator MMA on  August 28, 2013.

Kongo lost to Vitaly Minakov in April 2014 for the Bellator Heavyweight Championship. His last fight was a win over Alexander Volkov in Jun 2015 to bring his record to 23 – 10 – 2.  Recently at Bellator 199, he faced Javy Ayala on May 12 and defeated via knockout.