Chase Kalisz is a professional swimmer based in America who is a 2-time World Championship gold medalist in 200m and 400 m held in Budapest. Kalisz recently came to media attention when he won the Olympic gold medal in 400 meters. It is the first gold medal for Team USA in the ongoing Olympic games.

The gold medalist is also nicknamed Killer Kalisz and mainly competes in Individual Medly, a combo of four different styles including backstroke, butterfly, freestyle, and breaststroke.

Who is Chase Kalisz? What about his family?

Chase Kalisz was born on March 7, 1994, in Baltimore, USA. But he currently resides in Bel Air, Maryland. He is of American nationality and white ethnicity. 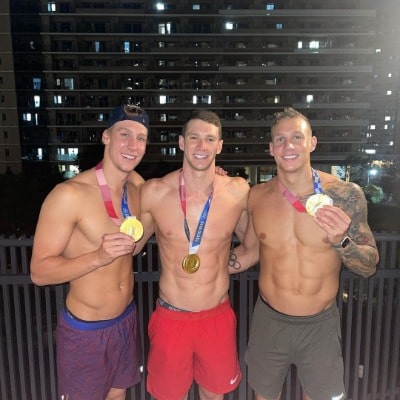 The pro swimmer's father's and mother's name is Mike and Cathy Kalisz. He has three siblings in his family, Courtney, Connor, and Cassidy and all of them are competitive swimmers.

His sister's Cassie Kalisz and Courtney Kalisz are also a swimmer by profession. Courtney is a two-time Olympic Trials semifinalist and was inducted into the Maryland Swimming Hall of Fame.

His younger brother Connor Kalisz competed at ACC Championships in 2017 and was ranked 18th in the 200IM.

The Olympic gold medalist Kalisz started swimming at the early age of five with his father. He attended Fallston High School in Fallston Maryland and went to the University of Georgia and graduated in 2017. There he became 3 time NCAA Champion in the 400 individual medleys.

During his college days, he won numerous trophies including gold medals in 200m and 400 m in Pan Pacific Championships in 2018 at Tokyo and 2 times the World Championship gold medal at Budapest in 2017.

The most memorable moment of Chase is winning the gold medal in the 400 m medleys in Olympic Games Tokyo. and is also going to compete for 200 m.

How much is Net worth of Chase? (Source of Income and Earnings)

The net worth of Chase Kalisz is estimated to be above $1 million. He collected most of his earnings from competing in different swimming competitions and from the bonuses and salary for participating in swimming. The Olympic gold medalist is currently signed with Michael Phelp's Team MP as a global athlete ambassador. He must be paid a handsome amount in this deal.

Michael Phelp's Team MP global ambassador Kalisz currently owns a white BMW car and is living a lavish lifestyle in the USA. He is very active on Instagram and frequently posts many places he has visited along with swimming glimpses.

After being the Olympic gold medalist, the market value of Chase is soon going to be more worth as more brands and sponsors are waiting to partner with the champion.

Relationship status of Chase Kalisz; Who is his Girlfriend?

Chase Kalisz is quite secretive about his girlfriends and dating life. Till now he has never opened a bit about his affairs with anyone in the public. But he is very active in social media and contains loads of photos with other female friends and partners.

The NCAA champion must be focusing on his career or might prefer love life behind the camera.

The current 400m Olympic gold medalist is currently waiting for another competition in 200m and more titles are coming in his way.