Chase DeLauter is a rising American college baseball player. He is currently playing in the James Madison Dukes. DeLauter plays as an outfielder for his team. He earned Freshman All-American honors from Collegiate Baseball Newspaper. Chase also played in the Rockingham County Baseball for broadway Bruins.

Chase DeLauter was born on October 8, 2001, in Hedgesville, West Virginia. He is among the four children born to Jason DeLauter and his wife, Melissa DeLauter. Chase has not shared a word about his parents and early life in public. DeLauter has two brothers, Caden and Jason, and one sister, Rylee. After graduating from Hedgesville High School, Chase enrolled at James Madison University and is majoring in Sport and Recreation Management. Talking about his physical appearance, DeLauter stands six feet and four inches tall and weighs 100 kg.

Chase DeLauter's Journey to the NHL

Chase started playing baseball along with his siblings in his home. The multi-talented athlete played numerous sports in his High School and represented High School in football, basketball and baseball. He committed to baseball in his junior year. DeLauter batted .500 and pitched to a 1.95 ERA with 64 strikeouts as a junior. In the final year of High School, Chase went 9-2 with a 0.84 ERA over 66 innings alongside hitting .606 with eight home runs, 52 RBIs, and 21 doubles. 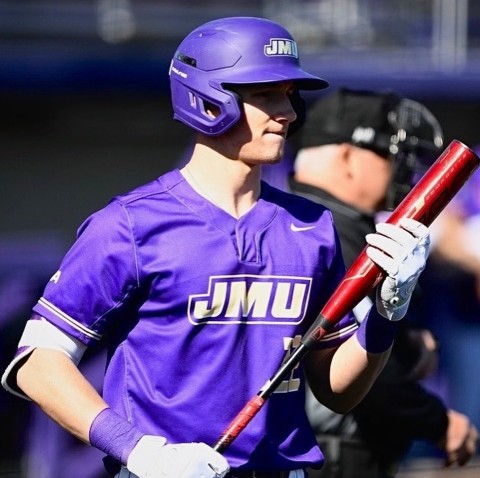 Chase currently plays for the JMU as an outfielder SOURCE: [email protected]

Chase was named the Gatorade Player of the Year for the state of West Virginia for the senior year. After graduating from High School, The player received numerous offers from universities and committed to playing for James Madison University. DeLauter earned a starting spot in his freshman year and batted .382 with 26 hits and 14 RBIs over 16 games before the season was canceled due to the COVID-19 pandemic. Chase earned  Freshman All-American honors from Collegiate Baseball Newspaper at the end of the season.

Who is Chase DeLauter Dating? Know About His Girlfriend and Relationship Status

Chase is very private about his relationship status. DeLauter seems to be single as of early 2022. The baseball player is very much early in his career and must be focusing on making a better career.

Chase is yet to start his professional career. He is currently playing college baseball, and NCAA has banned its athletes from receiving salaries while representing their universities. DeLauter has received a scholarship that helps him cover most of his expenses in college. The salary of an NHL rookie player is more than $700,000.

DeLauter is among the highest-rated players to list their name for the upcoming NHL draft. He will be signing a multi-million dollar with one of the franchises.