Chad Mendes is an American mixed martial artist ranked at number 5 in the featherweight division.  He previously fought in World Extreme Cagefighting and is currently signed to Ultimate Fighting Championship (UFC).

He is also known by his nickname Money.

The Early life of Chad Mendes

Mendes was born on May 1, 1985, in Hanford, California and despite his small height, Chad started fighting at the age of 5. Mendes is of Portuguese, Italian, Puerto Rican, Irish, and Indigenous peoples of America's descent and even being small and thin he would often act tough and take down kids much taller or stronger than him.

In his school, Mendes participated in wrestling and he finished at top 10 in the entire state for three consecutive times.  Even in his college California Polytechnic State University, he used to wrestle and holds the record of 64-14.

After college, Mendes began to train with Alpha Male which is a team of mixed martial artists and as he began fighting for the Palace Fighting Championship, he emerged undefeated.

While wrestling for Cal Poly in San Luis Obispo, CA. Mendes twice earned NCAA All-American honors with a record of 64-14 and finished the year with a 30-1 record and placed 2nd in 2008 NCAA Championships. He was also named Pac-10 Wrestler of the year.

Income and Net Worth of Mendes

Chad Mendes also advertises for various brands using his Instagram and other social media platforms. In 2015, Mendes earned $500,000 as an exclusive bonus from UFC 189 event. He is also the owner of Finz and feathers: Guide service and has had amazing turnout from the business.

Mendes has had a very high profile matches throughout his career, and he makes a good income from all of it. His net worth is estimated to be around $1.5 million. His UFC career earnings is reported to be $1,274,000.

Career and Awards of Mendes

Mendes won his first fight via unanimous decision against Erik Koch in his WEC debut on March 6, 2010, despite a cut over his right eye. After UFC merged with WEC, Mendes made his debut in February 2011 against Michihiro Omigawa.

On November 11, 2010, Mendes faced Javier Vazquez and defeated him and on January 14, 2012, at UFC 142 he fought UFC Featherweight Champion Jose Aldo losing at the first round via KO, which was his first professional loss.

Mendes won the fight via first-round KO against Cody Mckenzie on July 7, 2012. Mendes faced Clay Guida on August 31, 2013, at UFC164 and became the first man to finish him by strikes, which also earned him his first Knockout of the Night bonus award.

A rematch with Jose Aldo on October 25, 2014, at UFC 179 for the UFC Featherweight Championship, Mendes became the first man to knock down Aldo by dropping him with a left hand, in the first round. The Fight even won him World MMA Awards 2015 fight of the year award.

Following the rib injury of Jose Aldo, on July 11, 2015, at UFC 189 Mendes stepped in, on a short notice to face Conor McGregor who just lost to Nate Diaz for the interim championship. It was a brutal match and in the end, Conor won the fight via TKO in the second round.

Mendes has faced four defeats in his career, he lost to Jose Aldo once again for the title of UFC Featherweight Champion and in May 2015, Chad's contract with UFC was extended for eight more years.

UFC announced that Chad Mendes had been informed of a potential doping violation stemming from an out of competition test which was conducted by USADA on June 10, 2016. Following this allegation, USADA suspended Mendes for 2 years and he will not be eligible to compete until June 10, 2018.

On his defense, Mendes responded by saying quote,"I didn't do my homework and that was a big mistake. I own it and I'm going to pay for it."

He is expected to mack his return to UFC at UFC Fight Night 133 on July 14 in a fight against Myles Jury.

Mendes has his own YouTube channel where he uploads his documentaries of hunting and fishing experiences. 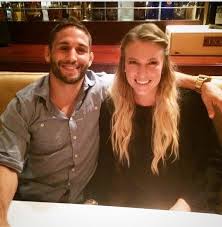 Mendes is still unmarried but is in a relationship with his girlfriend Abby Raines. She is a national level volleyball player and Abby was also featured in UFC embedded: Vlog series as Chad's girlfriend.

Fans are eagerly waiting for the end of his suspension and hoping to see their favorite fighter win ‘UFC Featherweight champion’ title soon.