An associate professor of Brigham Young University – Hawaii (BYUH), Chad Ford is known for his sports journalism with ESPN as well as for his study of conflict resolution with an emphasis on large group ethnic and religious conflict. Also, he is the director of the university's McKay center. Further, he has authored the book Dangerous Love: Transforming Fear and Conflict at Home, at Work, and the World.

Kansas City, Missouri native, Chad Ford was born on 1971 (age 48–49). As per nationality, he is an American who came from a white ethnic background.

Longtime NBA Draft Analyst Chad Ford is estimated to have a net worth of over $1 million. Director of the university's McKay Center, his annual income is tremendous. Not exactly but Ford makes around $0.3 million per annum.

Earlier, he was a full-time NBA reporter at ESPN, which he considered a dream job. According to the source, ESPN Reporters earn $85,000 annually or $41 per hour.

In 1996, Ford co-founded sportsTalk.com with Jason Peery. In 2001, they sold it to ESPN and was renamed Insider, where Chad still contributes to the subscription's content. He is a person behind "insider information" and breaking news on NBA stories, especially regarding the draft, trade rumors, and international basketball. By 2005, he had over 1 million Insider audiences. 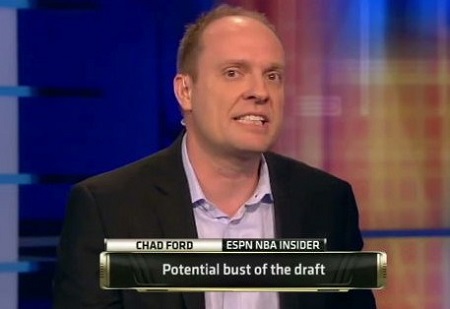 In 2005, he joined the faculty of Brigham Young University. Also, he has served on several projects around the world as a mediator and facilitator.

He has covered the NBA in Asia, Europe, and Africa. He also did the research for the United Nations in Northern Ireland. On April 28, 2017, he was laid off by ESPN alongside about 100 others at the network.

In 1995, Chad received a B.A. in history at Brigham Young University. Further, he pursued an M.S. in conflict analysis and resolution at George Mason University in 2000.  He holds a J.D. in Law at Georgetown University. Besides, he served as a researcher for the United Nations in Northern Ireland.

Yes, Chad Ford is a married man. He exchanged the vows with Amanda Ford. There is not much information regarding the couple's love story: where did they meet, when did they got married, and so on. But it is sure that the two are in the somewhat same professional field. Ford and his spouse who teaches courses in family conflict transformation and mindfulness have worked with thousands of students from over 90 countries in the world.

Chad and Amanda has four children but none of them are on the spotlight. The Chad family is a low key.