Atlantic Sun Coach of the Year, Casey Alexander, is a well-known American basketball head coach. He has been working as the head coach for the Belmont University since 2019. Casey started his career in 1995, working as the assistant coach for Belmont. Casey led his team to numerous championships including, OVC regular season Championship.

Casey Alexander was born on June 8, 1972, in Chattanooga, Tennessee. He is yet to share a word about his early life and his parents with the public. Casey holds American nationality and is of white ethnicity. After graduating from High School, Alexander enrolled at Belmont University and played for the University men's basketball team.

Casey Alexander's Net Worth and Salary In 2021

Casey Alexander has an estimated net worth of more than $5 Million. Alexander has earned most of his net worth through his successful career as a basketball head coach. In 2019, Alexander signed a five years contract worth $4 Million with Belmont. Casey has an annual salary of $800,000. 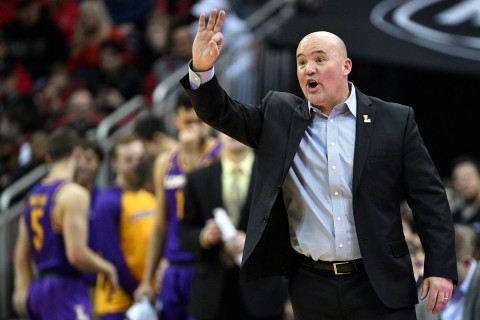 Casey is the head coach of the Belmont University SOURCE: The Athletic

Casey worked with a similar salary with his former team at Lipscomb. The average salary of a head coach is more than $100,000. Scott Drew is another rising American college basketball coach for Baylor University with a net worth of $5 Million.

Who is Casey Alexander Married To? Know About His Wife and Children

Casey Alexander is a married man living happy married life along with his wife and his children. Alexander tied his wedding knot with Sunni Dixon. The love birds first met each other at Belmont University. They dated for sometime before their marriage.

CAPTION: Casey shares a photo with his wife and his children SOURCE: Twitter @Casey Alexander

Shortly after the wedding, the duo welcomed three children, Allie, Reed, and Mason. The family of five is living a happy life. It's been more than two decades since their marriage, and there has not been a single report of the couple having ups and downs in their marriage life.

Casey started working as an assistant coach in 1995 with his alma mater Belmont. He played basketball for his college basketball team. Alexander joined the team shortly after his graduation in 1995 and worked under Rick Byrd.

The head coach was a part of a coaching staff that reached four NCAA Tournaments. After working with the team for more than fifteen years, Casey joined Stetson University as head coach.

Alexander started his career with a 24-36 record in two seasons. On May 18, 2013, Casey was named Lipscomb's head coach, remaining in the A-Sun, and returning to his native Tennessee. In his very first season, The season finished 5th in Atlantic Sun Conference. In 2017, The head coach led his team to their first NCAA Division I final but lost.