Cara Banks is an English TV personality who was the presenter of the Morning Drive golf channel which features numerous PGA Tours. She replaced the former hist Holly Sonders in 2015 after she left the network. Prior, she is also a host of Golf Central. Before joining Golf Channel, she hosted Sky Sports’ Golfing World.

What is Cara Banks' Net worth in 2020? Is she married? Who is her Husband? Read the article to know everything about the Golf channel host in detail.

Cara Banks Salary and Net worth

In 2020, she has a net worth of $1 million which she earned through various channels through her professional career. She first started her career as a presenter in the "Golfing World" program of IMG presenting golf on Sky Sports. She also hosted Coverage Tennis.

She also hosted the Morning Drive program on Golf Channel since 2015 until being replaced by Paige Mackenzie. She reportedly earned more than $100,000 as the host of the show. She currently presents Golf Central and makes thousands of dollars from the show.

Cara was also the host of the 2017 World Golf Hall of Fame induction ceremony and even covered the 2012 London Olympics, every major golf tournament, and has the Ryder Cup 2018 in France. she made huge earnings through that.

Who is Cara Banks' Husband?

The 25-year old TV host is currently married to her husband Oliver Banks. Initially popular as Cara Robinson, she changed her name to Cara Banks after he marriage with Oliver. the couple first met in the early 2010s and started dating in around December 2011. 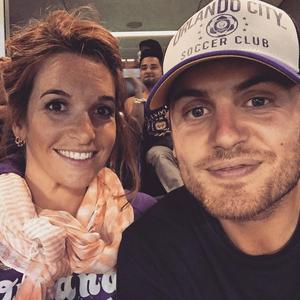 After being in a relationship for about 5 years, the couple got engaged on December 23, 2016. They tied the knot on October 6, 2017, at the Royal Cinque Ports Golf Club. They had their honeymoon in Santorini after the wedding.

The couple is the parents of a son born a year before. They have a son named Jesse Jagger Myles Banks who was born on June 1, 2019.

Cara Robinson was born under the star to sign Leo on 7 August 1985. She is originally from London, UK but now lives in Florida, USA. Her parents are Michael & Sarah Robinson. Her mother was president of the British Alpine Skiing Ski Clubs. Her family runs a golf holiday organizer service.

She first studied at Ashdown College, a co-ed preparatory school, she attended.

Caa Banks is very tall and stands at a height of 6 ft.and 1 inch. Banks towers over several of her Morning Drive colleagues. Her body weight is 143 lbs. She is 35 years old as of 2020.

Cara lost her Brother in an Accident

Cara also had a brother named Myles Banks who went missing on December 2009 during an annual Ski trip to Wegan, Switzerland. The dead body was found after a long search on a steep cliff. Her brother was 23 years old when he died.

She has always been the support of her family since her brother's death. She even started a charitable trust in her brother's name.