Caeleb Dressel is a professional swimmer who is the current world record holder in the 100m butterfly strokes. He is also considered one of the most dominant swimmers in American history after Michael Phelps.

Currently, Dressel has stormed the world of swimming by winning 5 gold medals in different races in Olympic Games Tokyo 2020. With this, he becomes the third American to win three individual golds in a single Summer competitive game along with Michael Phelps and Mark Spitz.

He is also the 15 times world Championship medalist, 2 times Olympian, and multiple record holders making him and Team USA the force to be reckoned with in international competitions.

Who is Dressel? (Childhood and Family)

Caeleb Remel Dressel, famously known by the name Calaaeb Dressel was born on August 19, 1996, in Green Cove Springs, Florida, USA. He represents the United States in different international-level competitions. He is also a part of Cali Condors, a professional swimming club.

The pro swimmer athlete's father's and mother's names are Michael Dressel and Christina Dressel. He currently resides in Orange Park, Florida. He has four siblings named Tyler, Sherridon, and Kaitlyn, and all of them are competitive swimmers.

The rising of Olympic Champion

Dressel was exposed to swimming at an early age growing up with brothers and sisters. As a kid, he was also interested in soccer and other games, but the love for swimming made him focus more on that.

He went to Clay High School situated in Florida and started participating in competitive games. He participated in United States Olympic Trials, in 2012 while he was still in high school.

He attended the University of Florida in 2014 and graduated in 2018. He won the NCAA title in 50 yards during his freshman year and was named the 2015 SEC Freshman Swimmer of the Year. In senior year, he won the 50 meters and 100 m freestyle.

He has been active in major competitions since 2016 and has won some of the major titles.

How much is the net worth of Caeleb Dressel?

Two times Olympian gold medalist Caeleb Dressel's net worth is estimated to be 3 million approximately. He accumulated most of his earnings from competitive swimming and sponsorship with various companies like Speedo, Toyota, Coca Cola, and Reese's chocolates. 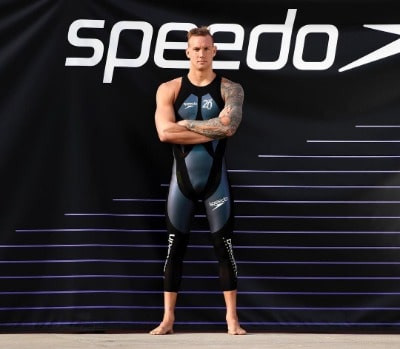 As per the source, Caeleb signed a sponsor deal with Speedo, a swimwear brand on July 19, 2018. He has also appreciated Speedo for their support in his Instagram post. 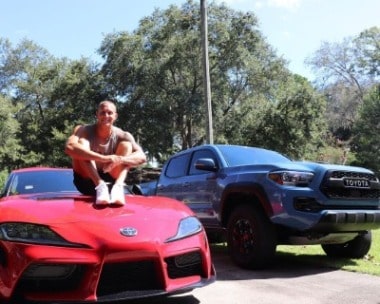 Being the Olympic gold medalist recently in Tokyo, his market value is only increasing as new brands and sponsors are on wait to have a deal with him.

Caeleb Dressel is currently married to Meghan Haila, who is also also a swimmer. Caeleb met his present wife during his high school days. The couples were in a romantic relationship since 2013. 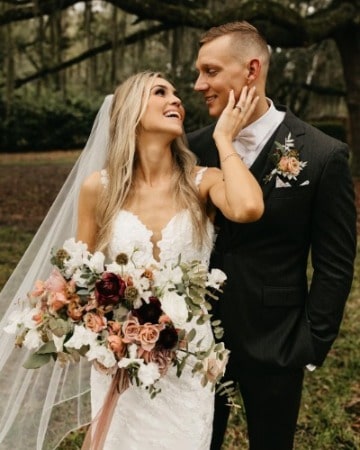 The pairs tied their knot in February 2021 in their hometown. Meghan constantly supports Caeleb in swimming and most of the time go along with her husband in competitions.

Meghan has converted to surname as her long-time love and presents her as Meghan Dressel in her Instagram account.

Caeleb's tattoos and their meaning

Caelebs got a load of tattoos along his arms and hands and has changed. He has a tattoo of an eagle on the shoulder that goes up to his chest representing his favorite bible verses. He also shows his love towards Florida Gators with the tattoo of a gator on his left forearm.

A of 2021, Caeleb is just 24 years of age but a loads of titles and records. Surely, more are coming in his title collection and no doubt, Dressel is going down as one of the greatest swimmers in history.