Bruno Eduardo Regufe Alves or simply known as Bruno Alves is a professional football player who plays as a center back for Portugal National Team and Scottish Premier League club Rangers FC.

Apart from playing for several European football clubs, he has represented Portugal in their youth teams and played at the FIFA World Cup in 2010 and 2014, Summer Olympics in 2004, FIFA Confederations Cup in 2017, UEFA Euro 2008, 2012.

He was also the part of UEFA Euro 2016 winning Portuguese team captained by Cristiano Ronaldo.

Bruno Alves holds a Portuguese nationality having a Brazilan background through his grandfather. He was born on 27 November 1981 in Povoa de Varzim, Portugal to father,  Wahington Alves who has played over a decade in the Portuguese clubs.

He has an older brother, Geraldo Alves and younger brother, Julio Alves who are also professional footballers. His uncle Geraldo Assoviador has been a sportsperson in his times.

The Portuguese defender started his junior career joining the youth teams of Portuguese clubs like Varzim SC and Porto.

Bruno Alves’s Net worth and Salary

Bruno Alves' net worth along with endorsing several sports products like Nike can be estimated to be above $ 1 million and with his fortune, he loves to spend his time and vacation at the most memorable places with his family.

After playing the reserve side of Porto, he signed with the senior team in 2002 and was transferred to clubs such as SC Farense, VS Clube, and AEK Football Club.

He was the part of the team that won Primeira Liga and Taca de Portugal for several seasons.

Bruno Alves signed with Russian football club, Zenit Saint Petersburg in early August 2010 for a transfer fee of €22 million and scored his first Russian Premier League goal for the club, against AEK Athens on 30 September 2010.

Bruno Alves signed a three-year contract deal with Turkish football club, for a transfer fee of €5.5 million on 5 June 2013.

After a successful spell with the Turkish club, he signed a two-year contract with the Italian side, Cagliari on 5 June 2016 and made his debut for the club SPAL on 15 August 2016. He scored his first goal with a freekick against Bologna on 11 September 2016.

Bruno Alves is currently signed to  Scottish Premier League club, Rangers FC on 31 May 2017 and scored his first goal against  Dunfermline Athletic on 9 August 2017.

After playing several years for Portuguese junior teams, he represented Portugal in the  2004 summer Olympics at Greece.

The Portuguese defender made his international debut for the senior team managed by Luiz Felipe Scolari against Kuwait in June 2007 and scored his first goal for Portuguese side against Azerbaijan on 13 October 2007.

He has played at major FIFA tournaments like FIFA World Cup in 2010 and 2014 editions, 2017 FIFA Confederations Cup as well as UEFA Euro Championship finals in 2008, 2012 editions.

Bruno Alves along with fellow Portuguese defender, Pepe was part of the Portuguese squad captained by Cristiano Ronaldo that won the 2016 UEFA Euro Championships held in France.

The order of merit winner, Bruno Alves, currently 36, has a height of 6 feet 2 inches and weighs about  83 kg. 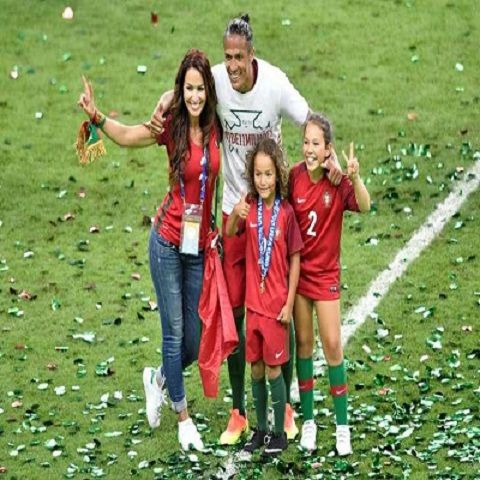 He is married to his wife, Khut Alves and the couple is blessed with a son, Leonardo Alves and a daughter, Adriana Alves.