Bruce Buffer is an American official octagon announcer for Ultimate Fighting Championship (UFC) events. He is introduced on broadcasts as the "Veteran Voice of the Octagon". Besides announcing, he owned the company called The Buffer Partnership and served as CEO. Bruce Buffer also hosted different TV shows as well as was the one-time kickboxer and professional poker player in past.

As an official fighting arena announcer, Bruce Buffer reportedly earns around $100,000 as his salary per event from Ultimate Fighting Championship (UFC). Further, he has roughly accumulated the net worth of $10 million. Buffer is not married till the date.

Bruce Buffer was born on May 21, 1957, as Bruce Anthony Buffer in Tulsa, Oklahoma, to the father Joe Buffer and mother Connie Buffer. As per his nationality, he is American and belongs to White ethnicity. Further, his star sign is Gemini. He has a half-brother, Michael Buffer.

Chattering about his educational background, the gifted television host must have been a graduate student. Though the high school and the university have not been mentioned in the given data, it can be assumed him to be a qualified personage.

At the very beginning, Bruce started his career from martial arts when he was thirteen years old. Residing in Philadelphia, Pennsylvania, and studying judo was a pickup for his growth on the related field. He ranked up to Greenbelt in judo.

Bruce migrated to Malibu, California along with his family at the age of fifteen and got to introduce a different fighting style, Tang Soo Do. He held a second-degree black belt in Tang Soo Do. Then after, he began Kickboxing in his twenties but was forced to give up the sport at 32 after suffering from traumatic brain injury. Buffer gave up the fighting sport but the fascination inside him couldn't fade and he pursued in hosting the organization of same sport.

Buffer is an official announcer for The Ultimate Fighting Championship (UFC) and also has a signature move called the "Buffer 180", in which, he motions directly across the Octagon before quickly spinning and pointing to the corner being introduced.

At UFC 100, after Joe Rogan months of encouragement, Buffer performed a "Buffer 360" during the introduction of Frank Mir and Brock Lesnar. He also exclusively performed the "Buffer Bow" for Randy Couture, bending down as a Knight would to a king in the Honour. Buffer has announced many other MMA promotions internationally including a K-1 Kickboxing organization, and boxing event on HBO. He announces for the biannual Abu Dhabi Combat Club (ADCC) too.

Bruce Buffer is also a world-rated poker player on the professional circuit and has appeared on ESPN's World Series of Poker Main Event Show where he placed 6th. Plus appeared during the sixth season of the NBC show Poker after dark along with Strikeforce Fighter Dan Henderson and UFC Fighter Randy Couture.

Moreover, Buffer has also emerged in various TV Shows and TV series such as Friends, Entourage and more.

World Series of Beer Pong is the largest Beer pong tournament in the world where Bruce Buffer is also the official announcer. Despite being a ring announcer he was recently featured as an announcer pack in the video game, Smite.

Bruce Buffer Net Worth and Salary

As of 2018, Bruce Buffer summons a very good amount of money as an American UFC announcer. he reportedly has an estimated net worth of $10 million. Talking about his salary, Buffer receives $100,000 per event.

Kept aside his financial earning, Bruce gets to travel the world on the company's dime while getting a front-row seat to every single fight. His personal assets also include a house in Venice Beach and costly car.

Bruce has a half-brother named Michael Buffer who is also an American ring announcer for boxing and wrestling matches. Both of them are offspring of the same father, but only Bruce was raised was Joe. Michael is the child of Joe Buffer's first wife but after the separation of his biological parents, he was raised by the foster parents. Michael age was only 11 months when his parents got divorced. 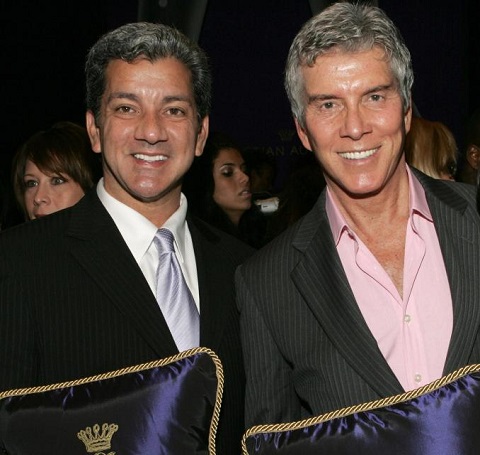 The two brothers didn't grow up together, in fact, the family was reunited when Bruce reached at the age of 30 and Michael was in his 40s. He was the one who introduced Bruce to announcing business. while following the footsteps of his half-brother, he became an icon himself and the voice of Octagon.

Both brothers own a company, The Buffer Partnership and Bruce serve as a CEO of their company.

Reportedly, neither Bruce is married nor involved in any romantic relationship. It is rumored him to be a gay but the information has not been classified yet.

Other than being a famous ring announcer, Bruce is also pretty famous in social media. He has a follower of 523k on Instagram and 257K on his official Twitter account.

Even after the aging, Bruce still maintained his physical structure and has an attractive physics. He measures 5 feet 11 inch in height and has an appropriate weight accordingly.