Briana Collette Scurry a.k.a. Briana Scurry is a retired soccer goalkeeper who currently stands as assistant coach of the Washington Spirit. During her playing stint, she played for the Atlanta Beat (2001–2003) and Washington Freedom (2009–2010) as well as for the United States national team (1994-2008).

On 3rd August 2017, Scurry was named he National Soccer Hall of Fame, becoming the first woman goalkeeper and a first black woman to be awarded the honor. Furthermore, she is second-most among female soccer goalkeepers with a total of 173 international appearances.

A native of Minneapolis, Minnesota, Briana Scurry was born on September 7, 1971, under the star sign Virgo. By nationality, she is an American who came from an Afro-American ethnic background.

Footballer turned coach, Briana Scurry has an estimated net worth of  $0.5 Million as of 2019. The veteran goalkeeper almost spent 17 years playing at the domestic and international levels.

According to U.S. Soccer, the national team contracted players earn between $67,500 to $72,500 salary for playing in the National Women’s Soccer League.

Currently serving as a assistant coach of the Washington Spirit, her base salary is reported $55,000 per annum.

Briana Scurry is an openly lesbian who is married to his long-time girlfriend, Chryssa Zizos. The couple tied the knot on 4th June 2018 in an intimate ceremony. 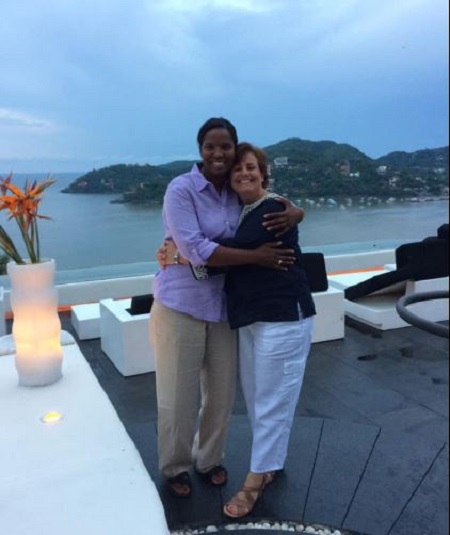 Scurry met her future wife, Zizos, after a surgery, ongoing fights for medical restitution following a season-ending concussion injury. After some time, they fell for each other and soon started dating. In 2016, they celebrated valentine together. 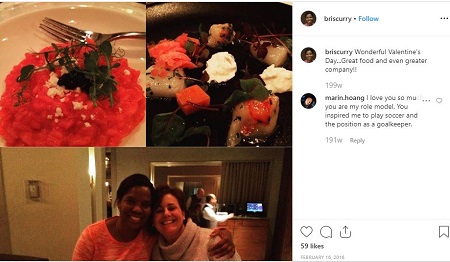 Scurry's spouse, Zizos, is a graduate of Cleveland Heights High School and Eastern Kentucky University, where she majored in Journalism/Business. Further, she also studied Public Communication - Crisis Management at American University. She is a founder as well as CEO at Live Wire Strategic Communications. On top of that, she has a daughter, born in 2003.

Scurry is the youngest of nine children born to parents: Ernest and Robbie Scurry. She was into sports since her childhood.

While at the Anoka High School, she played goalie for four years as well as was instrumental in their Minnesota State Championship win in 1989, which ended in a shootout triumph. In high school, she fell in deep love with basketball. Also, she ran track and played floor hockey and softball.

After graduation, she enrolled at the University of Massachusetts and played for UMass Minutewomen.

Upon retirement as a soccer player, she pursued a career as a coach. In 2011, she became the general manager of the WPS franchise magicjack. That same year, she also served as the rotation of studio commentators for ESPN's telecasts of the 2011 FIFA Women's World Cup.

Suffered a season-ending concussion early in the 2010 season

As of 6th December 2017, she stands as the First Assistant Coach of the Washington Spirit as well as a Technical Advisor for the Spirit Academy programs in Maryland and Virginia.