Brian Belichick is an American football coach who is currently serving as a safeties coach of the New England Patriots of the National Football League (NFL). He originally joined the organazation in 2016 as a scouting assistant and then coaching assistant (2017-2019).

How Much Is Brian Belichick's Net Worth & Salary In 2020?

It's been over four years since Brian Belichick has stepped in the coaching line. Started as a scouting assistant he later became a coaching assistant and now a safety coach. According to the source, the safeties coach pulls $400,000 per annum as salary. Not exactly, but the coach is estimated to have a net worth of $0.5 million.

On the other side, his father, Bill Belichick's net worth is approximately $60 million and has an annual salary of $12 million, which he receives being the head coach of the New England Patriots.

Brian Bellichick is the son of Debby Clarke Belichick and Bill Belichick, an American professional football coach who serves as the head coach of the New England Patriots of the NFL. His grandfather, Steve Belichick was an American football player, coach, and scout.

He was raised alongside two siblings: Amanda, is currently in her sixth season at Holy Cross as the head coach of the women's lacrosse program in 2020-21 and Stephen, a outside linebackers coach for the New England Patriots.  were a high school sweetheart. 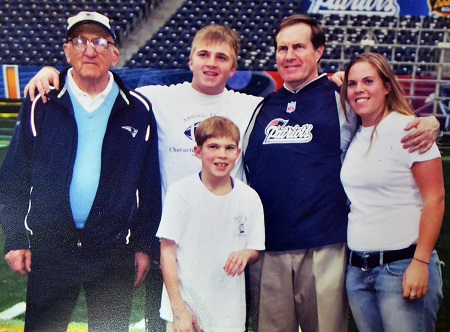 In 2006, his parents: Bill and Debby divorced. They were a high school sweetheart and remained married for almost three decades. Bill was accused of maintaining a relationship with former Giants receptionist Sharon Shenocca, which helped precipitate her divorce. Since 2007, Brian's father has been in a relationship with Linda Holliday, a Executive Director of Belichick's namesake foundation.

Regarding Broan's education, he enrolled at The Rivers School where he played lacrosse. Later he transferred to Suffield Academy where he was an All-League selection in football and lacrosse. Upon graduation, he attended Trinity College where he played Lacrosse for the college team.

On 21st July 2016, Brian Belichick was hired by the New England Patriots as a scouting assistant. That season was his first and only year working in the front office. During the team's 2017 Super Bowl-winning playoff run, he started assisting the coaching staff with film breakdowns.

It is still unknown if the safeties coach is married, in a relationship, or single. There is less to no information regarding his girlfriend or wife. His love life is totally mysterious. Additionally, he is nowhere to be found on the socials such as Facebook, Instagram, and Twitter, It seems like, Brian prefers his personal life private.