Michael Carter is an American football running back signed to the New York Jets in the NFL. He finished his collegiate career at North Carolina and was selected by the Jets with the 107th overall pick in the 4th round of the 2021 NFL Draft.

Navarre, Florida native, Michael Carter was born on 7th May 1999, under the star sign Taurus. The twenty-two years old holds an American nationality and is of Afro-American ethnic background.

How Much Is Michael Carter's Net Worth In 2021? salary & Contract

Corey Davis is the highest-paid rooster of this season while Marcus Maye and George Fant are ranked 2nd and 3rd respectively.

Yes, Michael Carter is in a relationship. In June 2021, he posted a picture with his girlfriend and made it public. "Locked in Forever," he wrote. 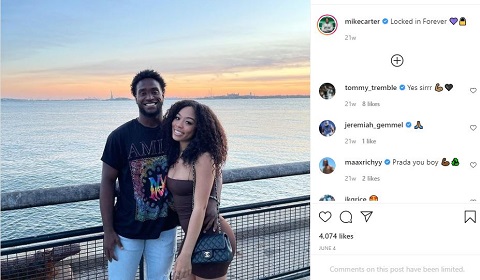 Besides, there is not much information about his girlfriend.

Michael Carter enrolled at Navarre High School where he played football for high school. During his junior year, he rushed for 526 yards and nine touchdowns before suffering a season-ending injury during the third game.

As a senior, he rushed for 2,536 yards and accumulated 3,345 all-purpose yards and 45 total touchdowns. Also, he was named the Florida Offensive Player of the Year by USA Today.

Over the offers from Florida, Louisville, Mississippi State, and Tennessee, Carter committed to play college football at North Carolina.

As a true freshman for the North Carolina Tar Heels football team, Carter rushed for 559 yards on 97 carries and 8 touchdowns. The following season, he rushed 84 times for 597 yards and two touchdowns and caught 25 passes for 135 yards and a touchdown.

As a junior, he rushed for 1,003 yards and 3 touchdowns with 21 receptions for 154 yards and two touchdowns. Further, he was named third-team All-Atlantic Coast Conference (ACC).