Paulinho, the Brazilian footballer, currently plays as the midfielder for the Spanish club Barcelona. The
2013 FIFA Confederations Cup Bronze Ball winner, 29-year old Paulinho is blessed with massive fame and enjoys the net worth of $5 million with his wife.

The member of Brazil National Team for 2018 FIFA World Cup, Paulinho is married to his longtime girlfriend Barbara Cartaxo for 2 years. The couple shares 4 children together including twins. Probably, you are curious about Paulinho's married life with his wife, relationship, and children, right? Let's know.

Relationship and Married Life of Paulinho With Wife Barbara Cartaxo

Well, Paulinho has kept his relationship details with Barbara quite low, but it is reported that the couple started dating back in 2007 when Paulinho played for FC Vilnius.

Barbara, the Unicsul – Universidade Cruzeiro do Sul graduate, has always been the source of inspiration for Paulinho as she supported him on his bad days.

Already the parents of 2 children, the couple, nearly after 9 years of dating, got married in August 2016.

Sources claim that the couple's elder daughter Bia and son Benjamin attended their marriage, but the wedding detail is not disclosed yet. 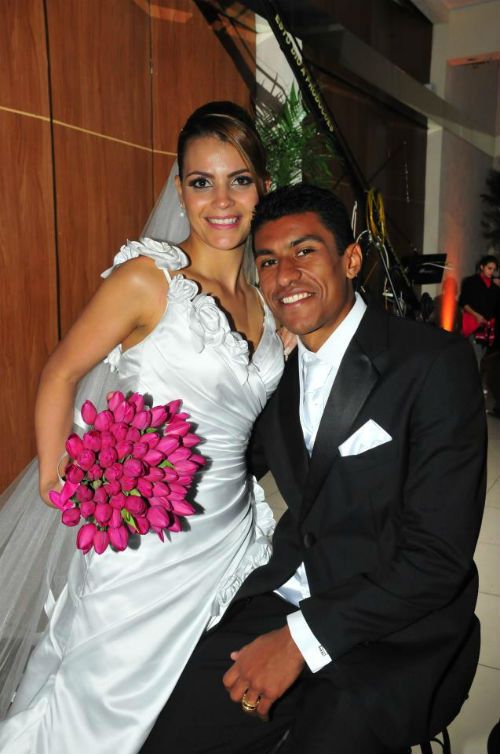 Even after these years, the couple is leading a healthy relationship and their married life is going as smoothly as always.

On their first marriage anniversary, on August 22, 2017, Paulinho shared a romantic post kissing his wife via his Instagram.

Probably, many of us have noticed that Paulinho rarely makes public appearances with his wife, however, he doesn't shy away to display his love on occasions.

The couple's family of 4, turned out to be 6 after they welcomed twins. Let's know more about their children.

Children of Paulinho and Barbara Cartaxo

As mentioned above, Paulinho and Barbara before their marriage were the parents of their daughter Bia and son Ben. The couple later got blessed with twins, Jose Pedro and Sofia.

The couple welcomed their daughter Bia on September 9, 2008. This was followed by a son Benjamin, aka Ben, in 2015.

On August 14. 2017, Paulinho signed with Barcelona and 2 months later, the Facebook page-Viva Barca revealed that the Paulinho and his wife Barbara were pregnant with their 3rd child.

In December 2017, Paulinho and Barbara became parents for the third time, and the happy moment became special as they welcomed twins, Jose Pedro and Sofia.

Have a look at Paulinho's twin children.

We wish the happy family a lot of happiness.