Brandon Slater is a rising American college basketball player. He has been playing in the Big East Conference for Villanova University's men's basketball team. Slater offers a versatile defensive weapon for the Wildcats. Brandon plays as a small forward for his team.

Brandon Slater was born on September 14, 1999, in Centerville, Virginia. Slater rose to fame through his career in college basketball; so much about his parent and sibling are still under the radar. Brandon graduated from Paul VI High School and enrolled at Villanova University. Talking about his physical appearance, Slater stands six feet and seven inches tall and weighs 105 kg.

Brandon started playing basketball in middle school. He played numerous sports in High School as his parents encouraged him to participate in as many sports as possible. Slater remained with basketball and averaged 15.2 points per junior while seeing both guard and forward action. In his summer days, The player played with Team Takeover. 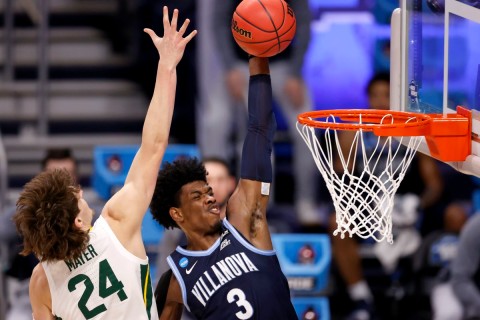 Brandon tries to score a point in a game SOURCE: VU Hoops

Slater was named the High School basketball team captain and averaged 14.9 points per game despite suffering a broken bone in his hand that sidelined him in February. He helped and led the Panthers to an 18-0 conference record. After graduating from High School, Brandon received numerous offers but chose to play for Villanova University.

Brandon played in Non-Conference Highlights before starting his regular season. He did not have an ideal start to his college career with appearing in fifteen games for a total of 52 minutes. Slater appeared in all thirty-one games as a reserve averaging 11.5 minutes per game in his sophomore year. At the end of the season, The player suffered back spasms and did not return until the end.

Slater averaged 16.8 minutes, 3.8 points, and 2.2 rebounds for the Wildcats in the junior year while appearing in all 25 games. Brandon will be playing for the team in his senior year and will probably list his name for the 2022 NBA draft along with Jermaine Samuels.

Brandon likes to keep his personal life away from the public. Although he is a regular social media user, he has not shared a word about his love life. The basketball player is believed to be single as of 2021. He might be focusing on the upcoming draft and making a good career. Brandon likes to spend his free time with his family and friends.

Net Worth, Earnings and Contracts

Brandon is playing at the college level. He is yet to start his professional career. As per the rules of the NCAA, Universities are not allowed to pay their players for them to represent the university sports team. Universities offer students scholarships that will help them to cover most of their expenses. The average salary of an NBA rookie is more than $600,000, and it raises to more than $10 Million if selected in the first round.