Brandon Royval, nicknamed Raw Dawg is a professional American Mixed Martial Arts (MMA) fighter who is signed to the Ultimate Fighting Championship. A professional since 2012, he competed at Kick Down MMA, SCL, WSOF, Combate Americas, and widely for LFA. To date, he compiled a record of 11-4-0 (Win-Loss-Draw).

Denver, Colorado native, Brandon Royval was born on 16th August 1992, under the star sign Leo. The twenty-eight years old is an American by nationality and is of white ethnic background. Regarding his physique, he stands 5'7" 170.18 CM and weighs 125 LBS 56.7 KG.

How Much Is Brandon Royval's Net Worth 2020?

As of 2020, Brandon Royval has an estimated net worth of $0.2 million. The major source of his earning is his fighting career. Currently, he is signed to the UFC where the fighter has a base salary on fight night no matter if they win or lose. Additionally, there is a “win bonus” involved for the winning fighter, “fight of the night” and “performance of the night” bonuses. 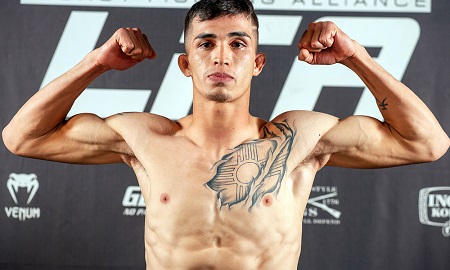 Before UFC he has extensively competed at LFA where the top fighter makes $1,500 to show and a $1,500 win bonus.

When it comes to Brandon's personal life, he is a quite confidential person. There is less to no information about his love life, not even his relationship status. Also, his official socials is full of his fighting photos rather than lovey-dobby. As of now, he is possibly single.

Brandon Royval was born to American parents. Further, he started MMA training because he was in love with sports. He would train with his brother and needed an advantage, so he started taking classes as well. Eventually, he dropped college to pursue MMA.

When asked about his heroes on an interview with UFC, Brandon answered " My parents, Anderson Silva, Nick Diaz, BJ Penn."

On 17th August 2012, Brandon made his professional debut at Kick Down MMA 102-Rebets against Sammy Rind. He won the fight via TKO. Further, he had five fights compiling a record of 3-2 before signing to LFA in 2017.

On 24th February 2017, he made his LFA debut at LFA 5 - Edwards vs. Townsend against Rakan Adwan. He won the fight via Armbar Submission. On 21st April 2017, he was defeated by Nick Urso at LAF 10 - Heinisch vs. Rota. Further, he won the following three fights against Demetrius Wilson, Jerome Rivera, and Charles Johnson. On 9th November 2018, he defeated Casey Kenney at LFA 53 - Royval vs. Kenney. On 3rd May 2019, he faced Joby Sanchez at LFA 65 - Royval vs. Sanchez. He won the fight. More, he defeated Nate Williams at LFA 79 - Royval vs. Williams via Armbar Submission.

In 2020, Brandon signed to UFC. On 30th May 2020, he made his UFC debut at UFC on ESPN 9 - Woodley vs. Burns against Tim Elliott. He won the fight via Arm-Triangle-Choke Submission.