Brandon King is an American football outside linebacker currently signed to the New England Patriots of the National Football League (NFL). 2× Super Bowl Champion, the hunk was signed by the team as an undrafted free agent in 2015 and playing for the team since then.

Born on June 8, 1993, King initially joined Highland Community College where he spent his freshman and sophomore seasons and further transferred at Auburn in his final two years of collegiate eligibility.

Regarding his personal life, King is married to his long-time girlfriend, Marisa Warren with whom, he shares a baby boy, Kayden Isaiah King.

Initially, King signed a three-year $1.57 million contract with the New England Patriots in 2015. In 2018, he inked a two-year contract extension with the team which worth $2.6 million.

Marisa Warren aka Risa is a beautiful WAG who belongs to NFL player Brandon King. The couple met before they both attended Auburn University in Alabama. In fact, they were also together in high school. 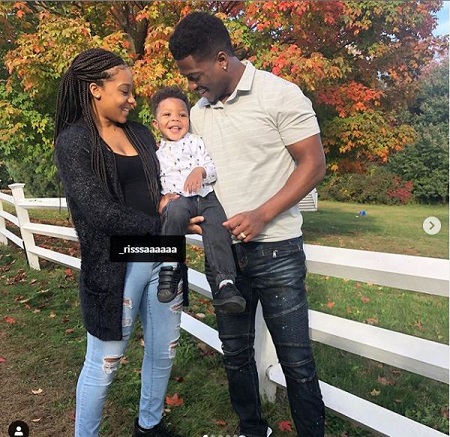 Brandon King with his wife and son SOURCE: Instagram @_king205

It was 2013 when the duo started dating and found out they were having a baby boy in July 2017. On 28th November, they welcomed their little one named, Kayden Isaiah King, who weighed 9lbs and 10 ounces at the time of birth. 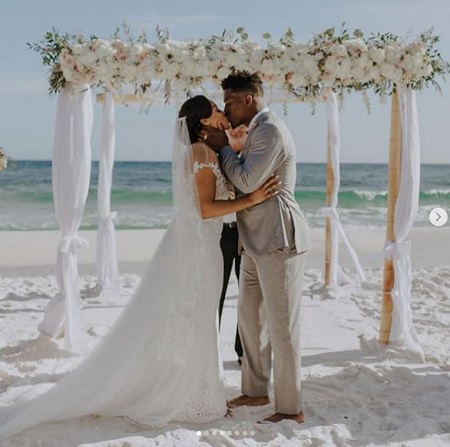 Good news on a row, Brandon and Marisa exchanged the vows in a secret ceremony. at the Great Smoky Mountain View Cabins on March 30, 2018.

At the tender age of five, he started playing football as his parents always had a rule that he had to have extra after-school activities.

Excelled in the linebacker position he took that skill for the Highland Scotties of the Kansas Jayhawk Community College Conference. Though he verbally committed to transfer to the University of South Alabama and to play for the Jaguars football team, he later switched to the Tigers of Auburn University after getting the offer.

After going undrafted in the 2015 NFL Draft, Brandon King was signed by the New England Patriots agreeing on a three-year deal. On 11th October 2015, he made his professional regular-season debut against Dallas Cowboys, recording two solo tackles in a 30-6 victory.

On October 29, 2017, he set his first career safety while defending a punt return when he tackled Travis Benjamin in the endzone during the Patriots' 21-13 win against the Los Angeles Chargers.

In the 2018 season, he led the Patriots to reach Super Bowl LIII, which they ended up winning over the Los Angeles Rams by a score of 13-3 alongside teammates Kyle Van Noy, Danny Amendola, and Tom Brady on 3rd February 2019.