Brandon Bolden is an American football player who is signed to the New England Patriots of the National Football League (NFL) as their running back and special teamer. He finished his collegiate career at the University of Mississippi and was signed by the Patriots as an undrafted free agent in 2012.

Baton Rouge, Louisiana native, Brandon Bolden was born on 26th January 1990, under the star sign  Aquarius. The thirty-one years old holds an American nationality and is of Afro-American ethnic background. He stands 5 ft 11 in (1.80 m) tall and weighs 220 lb (100 kg).

How Much Is Brandon Bolden Net Worth In 2021? Salary & Contract

In 2018, he joined the Miami Dolphin but returned to New England Patriot, agreeing on a 2 year $3.7M contract.

As of 2021, his net worth is approximately $8 million. No doubt, he is living a lavish lifestyle but a low key.

Brandon Bolden is married to Arianna Bolden. The two have been together since 2008 when they both attended Scotlandville Magnet High School and that’s been their story ever since.

The high school sweetheart tied the knot in June 2014. 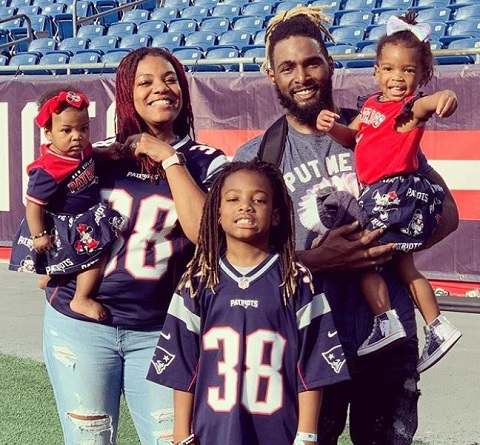 Mr. and Mrs. Bolden are now blessed with three children together. The couple had their first child, a son named Brycen in May 2011. The middle one, a daughter Axelle-Masai was born in March 2017. In February 2019, the family welcomed their youngest member, a daughter Aviana.

Brandon Bolden is active on Instagram with 150K followers. He often shares his family photos on his socials.

Brandon Bolden is the son of Michael and Marva Bolden.

His grandfather, Frank Pitts, (born November 12, 1943, in Atlanta, Georgia) is a former professional American football wide receiver who played in the AFL and the NFL. Most notable, he played for the Kansas City Chiefs in Super Bowl I and Super Bowl IV.

In 2021, Bolden changed his jersey number from 38 to 25 so his grandfather could see him playing in his number.

Brandon Bolden enrolled at  Scotlandville Magnet High School where he rushed for 886 yards and 12 touchdowns en route to being named First Team All-District 5-5A as a senior. Though he was heavily recruited by Les Miles and LSU, ultimately chose to play for Houston Nutt at Ole Miss.

Though some sites predicted he might be drafted in one of the later rounds. Brandon Bolden was not picked in the 2012 NFL Draft,

On May 2, 2012, Brandon Bolden signed a free-agent deal with the New England Patriots. In Week 3 of the 2012 season, he scored his first touchdown in the team' to the Baltimore Ravens. In Week 4, he led the Patriots with 137 yards on 16 carries which was an average of 8.6 yards per carrying.

He concluded the 2012 season with 56 carries for 274 yards and two touchdowns.

During the 2013 season, Bolden was active for 12 of the Patriots. The season finished with 271 rushing yards, 3 rushing touchdowns, and 4.9 yards per carry. Also, he had 152 receiving yards.

On November 9, 2015, Bolden had his first touchdown pass, an 18-yarder against the Washington Redskins. On February 5, 2017, he was a team member of the Patriots that won Super Bowl LI.

On September 2, 2017, Patriots released him but was re-signed two days later.

On September 1, Bolden was again released by the Patriots.

On September 4, 2018, Bolden joined the Miami Dolphins. In 2018, he recorded 91 rushing yards, two rushing touchdowns, and a receiving touchdown.