Brandon Beane is a well-known American football executive. He is best known as the general manager for the Buffalo Bills in the National Football League. Brandon joined Bills in 2017 and had started working as a Personal manager for Carolina Panthers.

Brandon Beane was born on July 27, 1976, in Norwood, North Carolina. He is among the two children born to Bob Beane and his wife, Cindy Beane. Brandon has a sister named Cristi.  After graduating from High School, Brandon enrolled at the University of North Carolina Wilmington. He completed his undergraduate degree in communications.

Brandon played American football in his High School days but did not continue coming to the university. After graduating from university, Beane joined Carolina Panthers and worked as a Personal manager. He worked with the team from 1998 until 2007. In early 2008, Panthers promoted him to director of football operations.

Beane's former workmate, Panthers defensive coordinator Sean McDermott joined the team. He made many changes in the team's formation, and many sports pundits criticized his tactics. In 2017, Beane's first season with the team, the Bills ended their 17-year playoff drought. Brandon has drafted several top players like Josh Allen, Tremaine Edmunds, and Ed Oliver. In December 2020, Bills renewed their contract with Brandon and extended the contract until 2025.

Yes, You read that right. Beane is the proud father of two children. Brandon tied his wedding knot with his longtime girlfriend, Hayley, in the 2000s. The love birds had been dating each other for some time before tying their wedding knot. Brandon and Hayley had private wedding ceremonies where only a few members from both the families and some close friends attended the ceremony. 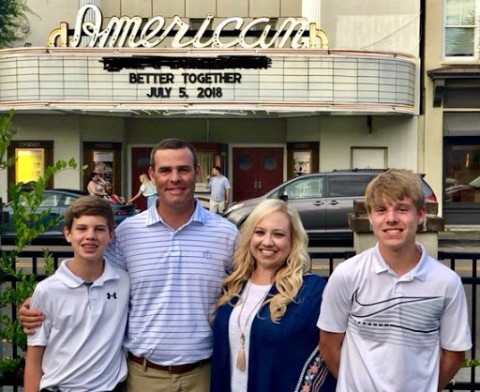 Beane takes his family to American theatre for a show SOURCE: Buffalo Bills

Shortly after the wedding, Beane and Hayley welcomed two children, Tyson and Wes. The family of four is living a happy life. Its been more than a decade since their marriage, and there have been no rumors of the couple having ups and downs in their married life.

Brandon Beane has an estimated net worth of more than $10 Million. Beane has been working as a general manager of Buffalo Bills for more than five years. In 2020, He extended his contract for four more years. No terms were announced. Beane has been successful in a $13 million reduction in the salary cap.

The salary of a general manager ranges from $1 Million to $3 Million. While Beane is one of the most recognized faces in the NFL, so, he must be making the maximum amount.