Bradley David Ausmus better known as Brad Ausmus is an American baseball former catcher who currently stands as the manager for the Los Angeles Angels of MLB. Throughout his 18-year MLB playing career, he played for the San Diego Padres, Detroit Tigers, Houston Astros, and Los Angeles Dodgers. Also, he was the manager of the Tigers and of the Israel national baseball team.

The fifty-years old has two daughters with his wife Liz Ausmus. At present, his net worth is $2 million as of 2019.

Brad Ausmus Net Worth in 2019; How much does Brad Earn?

Ausmus has an estimated net worth over $2 million as of 2019. Currently, serving as the manager of Los Angeles Angels, his salary is estimated no less than the six-digit figure,

Back in 2009, he agreed to a one-year salary deal 850,000 dollars salary deal with total compensation guaranteed at 1 million dollars to return to the Dodgers for his 18th major league season. 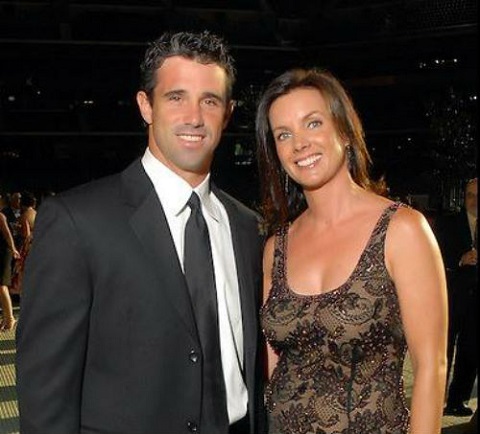 Brad Ausmus was born as Bradley David Ausmus on April 14, 1969, in New Haven, Connecticut. By nationality, he is an American and is of white ethnic background.

He is the only son of Linda Susan (his mother) and Harry Jack Ausmus (his father). His father is Protestant and mother is Jewish. His father is a retired professor of European history at Southern Connecticut state university. Jack is also the author of a Schopenhauerian critique of Nietzsche's thought, which Ausmus calls his favorite book.

Ausmus is Jewish who was born in new haven, Connecticut. His mother is Jewish but he was not raised in the Jewish religion and still takes pride in his heritage. In an interview with the Jewish Journal, he said that he wasn't raised with the Jewish religion and don’t have any feeling towards it. But, in the last 10 years, he had a few young Jewish boys who will tell him that he is one of their favorite players and they love watching him play baseball. They feel like baseball is a good fit for them because it worked for him and other Jewish players at the major league level.

Ausmus was a star in baseball at Cheshire high school. He was a teammate of national hockey league defenseman Brian Leetch who was a pitcher on the school's Connecticut championship team in 1984. He hit .436 as a junior and hit .411 as a senior and was entitled as the Cheshire Area high school player of the year.

He was named to the all-state team during both his junior and senior years. He was also a standout athlete in high school as a basketball guard. He chose an unusual way to the major leagues.

He initially refused to sign with the New York Yankees after the 1987 draft in which the team picked him in the 47th round, instead choosing to seek another childhood dream, that of attending Dartmouth college. While playing in the minor leagues during his off terms, the Yankees allowed him to attend classes at Ivy League school.

He graduated with an A.B. in government in 1991 and was a member of Chi Gamma Epsilon fraternity and the sphinx senior society. Ausmus became the first Ivy League catcher to play in the World Series in 2005 after Dartmouth's chief Meyers in 1916. At the beginning of the 2009 season, he was one of six Ivy Leaguers on major league rosters. He was named the ninth smartest athlete in sports by the sports news in 2010.

Ausmus started his major league two days later when he started for the Padres against the Chicago Cubs. He had a single in three at-bats in that league. He batted .293 and stole 16 bases in 1995. It was the most any catcher record after Craig Biggio stole 19 in 1991. He had his best offensive season when he batted .275 career highs in on-base percentage (.365) and slugging percentage (.415) in 1999 and made the all-star team.

Ausmus was signed as a free agent with Astros in November 2003 and did the same in December 2005. He had more walks (51) than strikeouts (48) and batted .304 with two out and runners in scoring position. He hit .230 and set a career high with nine sacrifice hits in 2006. In 2007 he batted .235 but was tied for second among all national league catchers with six stolen bases.

On July 27, he recorded his 100th career stolen base becoming the 21st catcher of all time to record that many steals. He won the Darryl Kile award for integrity and courage that is presented annually by local chapters of the baseball writers' association of America to players on the Astros and St. Louis Cardinals. He signed with the Astros to a one-year 2 million contract in October 2007 where the Astros planned him to play on a part-time basis and mentor J.R. Towles, who would catch the majority of the games.

He agreed to a 1- year, 1 million dollars deal inclusive of incentives to be a backup catcher for the Los Angeles Dodgers on January 26, 2009.

In his third season, he led the Tigers to finish in the second place with a record of 86-75 in the American League central division. The Tigers announced that they would be exercising the fourth year under Ausmus' contract, keeping him the manager for the 2017 season. On his final day of managing a career with Tigers, he handed his duty to Ian Kinsler.

For the 2018 season, he was appointed as special assistant to Los Angeles Angels general manager Billy Eppler.