Bill Poni Tuiloma, well-known as Bill Tuiloma, is a New Zealand professional football player who plays as a center-back or defensive midfielder for the Major Soccer League club Portland timbers. His attacking, pace and defensive capability create big barriers for the opponent. He is also the first New Zealander to play in Ligue 1. Bill also serves the New Zealand national team.

Bill Poni Tuiloma, the Portland defensive midfielder, was born on 27 March 1995 in Beach Haven, New Zealand. As of 2022, Bill is 25 years old, and his zodiac sign is Aries. Talking about his body measurement, he possesses a height of 6 feet, and he weighs 79kg. Further, Bill has light brown skin town and short hair.

The 6 feet, 79-kg center back Bill's ancestors are of Samoan descent. His family hail from Samoa. The Tuiloma family migrated to New Zealand, seeking better opportunities and life in their early life. Bill the Soman descent holds the New Zealand citizenship card and is of New Zealander nationality by law. He still loves and visits Somao in his leisure time.

However, former Marseille member Bill has remained muted about his parent's details. We will update you on this when it's available.

Portland Timbers jersey number 25 Bill Tuiloma commenced playing football early. He played his youth career for Birkenhead United, Asia-Pacific FA, Waitakere United and Marseille. He turned pro in soccer back in 2011, initially playing for Birkenhead United. After that, he was called in the Marseille B for four seasons. He appeared in a total of 35 games. 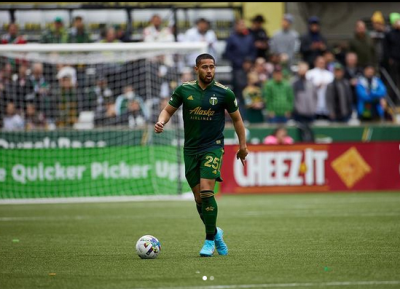 .His ability to oblige as a center-back and defensive mid-feilder led him into the senior squad of the Marseille, signing a contract in July 2013. Before coming into the French side, he gave trials in the English league. Bill made his first Marselie debut on 7 February 2015. He was loaned to Strasbourg B for a season-long before joining Portland Timbers. He signed a contract with MLS club Timbers on 25 July 2017. Since then, he has been playing for the Timbers.

Beach Haven-born soccer player represented New Zealand in several FIFA world cup games at diverse ages. The athlete has been playing for New Zealand since 2013. When he was 18 years old, he made his senior international debut on 15 October 2013. He made a total appearance of 31 matches and scored four goals for his nation.

On 24th March 2022, he scored a goal for his national side in the 2022 FIFA World Cup qualification match against New Caledonia.

On 30th March 2022, he again scored a goal for New Zealand in a 2022 FIFA World Cup qualification match against Solomon Islands.

2015-16 Championnat National winner Bill Tuiloma is a well-established player and a role model for many people. He resides in a lavish lifestyle presently.  He has been massively crediting his bank balance via his MSL career. As a Portland player, Bill nets a whopping salary of $2,85,000 per annum. He is the top 13 highest-paid player at Portland Timber. On top of that, he also makes an impressive income from his brands, endorsement and commercial ads. As per the report, his approximate newt worth is between $5Million to $10Million.

According to the Transfer market list, his trending market value is €1 Million. The center-back Bill contract with Portland expires on 31 December 2025.