Moreover, Khannous has been playing football professionally since 2009. The young footballer has played for multiple clubs and is doing well in his football career. Also, Khannous earns a good amount of money, and his net worth is pretty impressive at a young age.

Khannous is signed with Genk, and his deal with the club is decent. So, Salary Sport reports that Khannous has a weekly salary of £1,500 and his yearly salary is £78,000. Khannous makes most of his gains from being a professional footballer. 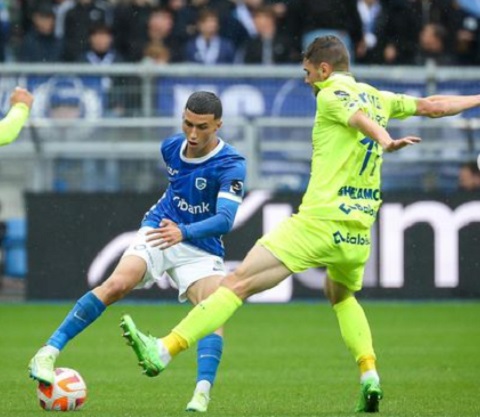 Moreover, Khannous is still active in this sport, and his income will surely increase. According to Transfermrkt, Khannous has a market value of €4.50 million, which is still growing gradually. Furthermore, the young footballer may have a net worth of around $100,000.

Apart from that, Khannous also makes money from brand endorsement and sponsorship deals.

Does Bilal El Khannous Have a Girlfriend?

No, Khannous does not have a girlfriend. The young footballer is single and not involved in any romantic affairs. Khannous is at the primetime of his career, and rather than searching for a lover, Khannous might be prioritizing his career.

Khannous is a private guy like Romain Saiss who does not expose his details to the media. So, it is pretty challenging to know about his love life. Besides, Khannous is busy with his football vocation at the moment.

Khannous was passionate about playing football from an early age. So, he began his football career after joining Anderlecht in 2009. With the youth team of Anderlecht, he played until 2019. After that, he joined the youth system of Genk in 2019.

Furthermore, Khannous signed his professional deal with K.R.C. Genk on July 24, 2020. His league debut came on May 21, 2022, while playing against K.V. Mechelen. As of now, Khannous has already made over ten game appearances.

Regarding his career at the national team, Khannous initially represented the youth teams of Belgium. He played for Belgium U15, U16, and U18. Being of Moroccan descent, Khannous now plays for the national football team of Morocco. He also played for U20 and U23 teams. Moreover, Khannous is in Morocco's 26-man squad for the 2022 FIFA World Cup.

Who Are His Parents?

Bilal El Khannous was born on May 10, 2004, in Strombeek-Bever, Belgium. His parents appear to be from Morocco, as Khannous belong to Moroccan descent. Besides, he holds Belgian nationality. As Khannous is very private, we cannot share details about his father and mother.

The Moroccan footballer, Bilal, is active on social media handles, where he is available under the username @bilalekns_34. Besides, he is followed by more than 65k followers and has shared more than 25 posts.