Bianca Belair Aka Bianca Nicole Crawford is a rising American professional wrestler. She is currently fighting as per the contract with the WWE under the SmackDown brand. Belair is the current WWE SmackDown Women's Champion in her first reign. Bianca is the first African-American woman to headline in WrestleMania and won her title against Sasha banks.

Bianca Belair was born  Bianca Nicole Crawford on April 9, 1989, in Knoxville, Tennessee, She is the daughter of Leonard Blair and his wife, Travonda Blair. Belair graduated from Austin-East Magner High School and then enrolled at the University of South Carolina. She moved out of the university before completing her degree. Bianca stands five feet and seven inches tall and weighs 75 kg.

Bianca was part of the track and field team in her High School days and also played for her university team. Belair became All-SEC and All-American as well as being named to the SEC's academic honor roll in 2011 and 2012. In 2016, The American wrestler started training WWE and signed a contract. Blair made her television debut under the ring name Bianca Belair as part of a battle royal to determine the number one contender for the NXT Women's Championship.

Belair was part of the WrestleMania Women's Battle Royal where she got eliminated by Becky Lynch. Bianca's undefeated streak of 367 days got away after losing the title match against Shayna Baszler. After WrestleMania, She made her Raw debut but later moved to the SmackDown brand. Belair won the Royal Rumble match in January 2021 eliminating Rhea Ripley.

In February 2021, Bianca challenged Sasha Banks for the SmackDown Women's Championship title and won the match. She retained her title against Bayley at the WrestleMania Backlash.

Who is Bianca Belair Married To? Know About her Married Life and Boyfriend

Bianca is married to her longtime boyfriend, Kenneth Crawford, better known as Montez Ford. The love birds walked down the wedding aisle on June 23, 2018, at a private wedding ceremony in their hometown. As per sources, they had been dating each other for more than two years before their marriage. Bianca and Kenneth got engaged in June 2017. Belair opened about her engagement through a post in her Instagram timeline. 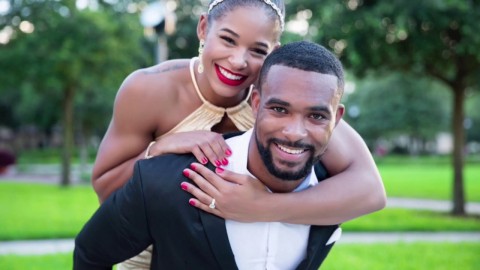 Bianca along with her husband, Kenneth at their wedding SOURCE: WWE star

Crawford was involved in a romantic relationship with his former girlfriend for more than three years and Bianca is the step-mother of two children. The family of four is living a happy married life. They are yet to welcome a new member to the family. As both of them are at the peak of their career, they might be waiting for the right time.

Bianca Belair's Net Worth, and Earnings

Bianca Belair has an estimated net worth of $1 Million. She is receiving a hefty salary worth more than $500,000 from her contract with the WWE. Belair is the current WWE Smackdown champion and has already featured in numerous top events. Bianca will be adding much more to her net worth in the future.