Marshall is estimated to have a net worth of $4 million at current. Furthermore, he is married and shares a son with his spouse.

Benji Marshall's Net Worth in 2021; How much does he Earn?

Marshall has an estimated net worth of $4 million as of 2021. Not to mention, the significant source of his income is rugby career. Currently, he receives around $750,000 ($865,748 NZ) as an annual salary from his current club.

While Benji Marshall was in a St. George Illawarra, he received $300,000 as a yearly salary.  In 2012, Benji Marshall's yearly salary was estimated to be 500,000 AUD. His salary while at Blues was $1 million a year. His net worth at current is expected to be about $4 million. 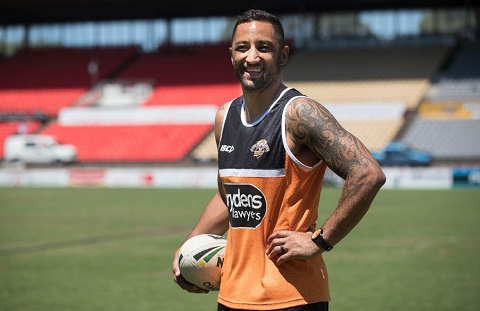 Marshall also made a significant amount from his endorsement deals with the companies. In 2014, he reportedly made around $1 million from endorsements. He prefers a John Taylor watch which is worth $159 and more.

Besides, he is interested in Golf and shares numerous pictures while playing golf. Marshall and his wife are often seen enjoying their holidays in an expensive destination.

Benji Marshall married his wife, Zoe Balbi Marshall on January 5, 2013, in Byron Bay, Australia. His wife, Zoe is a television presenter for over 10 years. The duo came into limelight after they officially revealed they are expecting their first child in September of 2017. On 26 Feb 2018, the duo welcomed their son, Benjamin Fox Marshall, weighing 3.83kg. 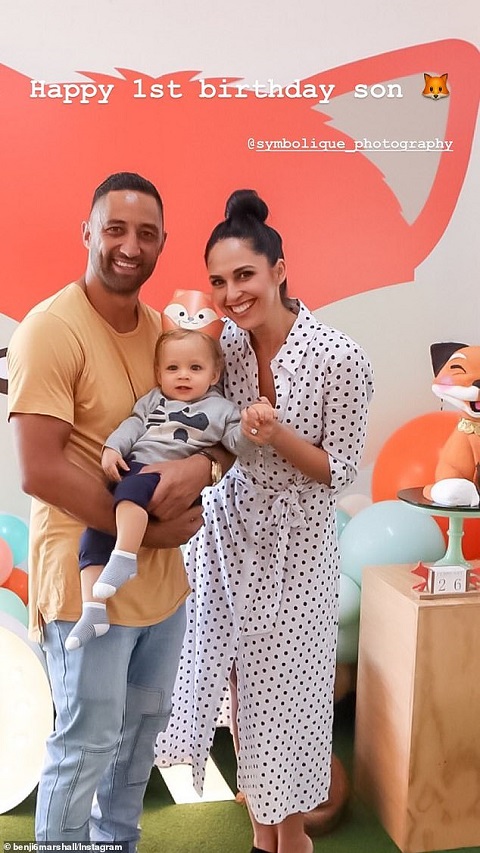 Currently, the duo is enjoying their peaceful life. Besides, Benji wants six children while his wife wants a much small family.

Zoe revealed about her forgetful past and her abusive former boyfriend earlier in November 2017. She also remembered her mother who died 11 years before in 2007.

Benji Marshall was born as Benjamin Quentin Benji” Marshall on February 25, 1985, in Whakatane, New Zealand. He was born to his father, Calvin and, mother Lydia Doherty and grew up with his siblings, Jeremy Marshall-King, a rugby player. and Jordan Marshall-King. He belongs to Maori ethnicity and holds New Zealander nationality.

Marshall was raised by his foster-father, Michael Doherty without any support of his biological father, Calvin. He enrolled at the Whakatane High School. At the age of 16, he got an offer to play for a high school in the Gold Coast, Queensland.

Marshall later joined the Keebra Park State High School. He played for the Australian Schoolboy's team in 2003 while he was at the High School.

Benji Marshall began his professional career, debuting in NRL, with the Wests Tigers in 2003 against "Newcastle Knights" as a substitute player which ended with 52-12 on his team side. His first NRL try came at Penrith Stadium against “Penrith Panthers”.

During the 2005 season, Marshall missed the opening round after he injured his other shoulder in the starting minutes of the first practice match. During the early 2010 season, he extended his contract with the club until of the 2015 season.

Marshall became the highest try-scorer for the Wests Tigers in March of 2010, breaking the record of 43 held by Daniel Fitzhenry. For the team, he made 118 points from 201 matches, 76 tries, 402 goals, and 10 field goals. He was the member of the team that won 2005 NRL Premiership.

Marshall then signed a two year deal with the St George Illawarra Dragons on May 9, 2014, and ended the year with 3 tries. Since Wayne Bennet's departure, he left the team to join the Brisbane Broncos at the end of the 2012 season, Marshall's overwhelming performance with the Dragons led the team to their first NFL final. He then played the match against his former club, Wests Tigers on July 24, 2016.  He made 4 points from 14 matches and 1 try before ending his career in the club.

In 2017 Marshall reunited with his former coach Wayne Bennett at Broncos, rejecting a one-year extension with Dragons worth $300 Thousand and signed a one year deal with Brisbane Broncos in 2017. Later, he left the club after a year, with 4 points in 14 matches. He signed a one year deal with the Wests Tigers in 2018. As a successful rugby player, he has been honored with Golden Boot Award for the world’s best player in 2010 three-seasons after Cameron Smith had won it.