Ben Healy is a professional rugby union playing side Munster for United Rugby Championship and Champions as a fly-half. Also, he represented Garryowen in the All-Ireland League.

They won over Christian Brothers College 18–17 in the final. Also, he won representation for Munster at U-18, 19, and 20 level and Ireland at under-18 and under-19 level.

On 29th November 2019, he made his senior competitive debut for Munster in their 2019–20 Pro14 round 7 fixture against Edinburgh where he started at fly-half and scored 11 points in the province 18–16 defeat.

His European debut for Munster came on 19th January 2020, in the 2019-20 Championship Cup in Munster's final pool 4 fixture against Welsh side Ospreys. For his performances throughout the 2020–21 season, Healy was awarded the John McCarthy Award for Academy Player of the Year.

At the international level, Healy has represented Ireland at U-20.

Turned professional in 2019, ben Healy is signed to Munster. Unlike other sports, the Rugby team does not make their roster's salary public. 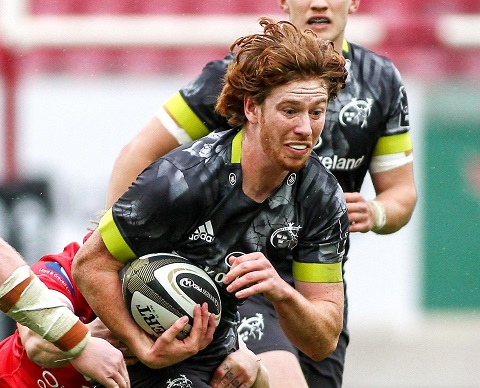 The Irish rugby union player is a quite confidential person when it comes to his personal life. He has dropped no hint about his relationship on media. Additionally, his IG only features 12 posts and that's all about the game and his mates. Since there is no confirmation, Ben Healy is possibly single.