A Moroccan international footballer, Aziz Bouhaddouz is currently signed to 2. Bundesliga side FC St. Pauli as a forward. A professional since 2006, he has played for numerous football club including SV Wehen Wiesbaden, Viktoria Koln, FSV Frankfurt, and Erzgebirge.

Mouhaddouz has been representing Moroccan National Team since 2016 and is included in the final 23 man for the FIFA World Cup 2018.

Aziz Bouhaddouz is a native of Berkane, Morocco, on 30th March 1987. His star sign is Aries. By nationality, he is a Moroccan and his ethnicity is under review.

When he turned one, his family relocated to Dietzenbach in South Hessen, where he eventually began his football career at local FC Dietzenbach, where he remained seven years long.

In 2003, he switched to SpVgg 03 Neu-Isenburg and subsequently to FSV Frankfurt the following year.

Aziz Bouhaddouz's Net Worth and Endorsement

The Moroccan player has an endorsement deal with Underarmour and often promotes the products on his Instagram.

After playing two years at FSV Frankfurt’s youth system, Bouhaddouz was promoted to the senior team of the club in 2006. Later after three years, he was loaned out to Erzgebirge Au for 1.5 years.

In 2011, Bouhaddouz moved to SV Wehen Wiesbaden on a free transfer. His first goal for the club came in a match against VfL Osnabruck and was then sent off.

After he was released from his contract with Viktoria Koln, Bouhaddouz signed for the Bayer Leverkusen reserves in September 2013. He played overall 27 matches and scored 24 goals for the club.

On 5th May 2014, Bouhaddouz arrived at SV Sandhausen, signing a two-year contract for an undisclosed reported fee.

In April 2016, he signed a three-year contract with FC St. Pauli. Upon his arrival, Bouhaddouz was assigned the shirt No. 11.

Aziz Bouhaddouz was born in Morocco but raised in Germany so he was eligible to represent both national teams.

In August 2016, he made his international team debut representing his native country, Morocco in a friendly goalless draw with Albania. A month later, he scored his first international goal in a 2-0 triumph over Sao in the 2017 Africa Cup of Nations Qualification.

In May 2018, Bouhaddouz was named in Morocco’s 23-man team along with his teammates Nordin Amrabat, Amine Harit, and Khalid Boutaib for the 2018 World Cup in Russia.

He scored the first own goal of the 2018 World Cup which resulted to 0-1 loss to Iran.

Aziz Bouhaddouz, 31, is a quite confidential person when it comes to his personal life and has disclosed much information about his love life. However, if we analyze his official Instagram account he has shared a photo with a lady with a caption bae but cleverly he has covered face.

According to his Instagram bio, he is a married man. 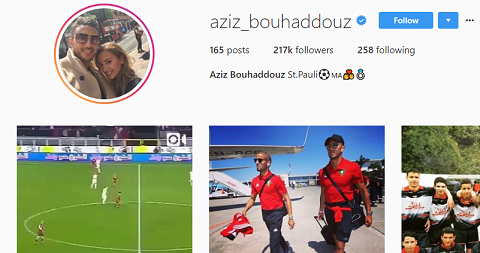 He has not shared any information about his wife. The couple might have married recently in a private ceremony.