Grant Jesus-Sultan-Akinola Ogundimu, simply known as Ayo Akinola is an American professional footballer who is currently signed to the MLS side, Toronto FC. At the international level, the forward represented the youth team of United States U15, U17, and U20. A matter of fact, he is eligible to play for the United States, Canada, and Nigeria but he is yet to make the decision for the senior team.

Ayo Akinola was born on 20th January 2000, in Detroit, Michigan, United States, under the star sign Aquarius. He holds an American nationality and came from an Afro-American ethnic background. 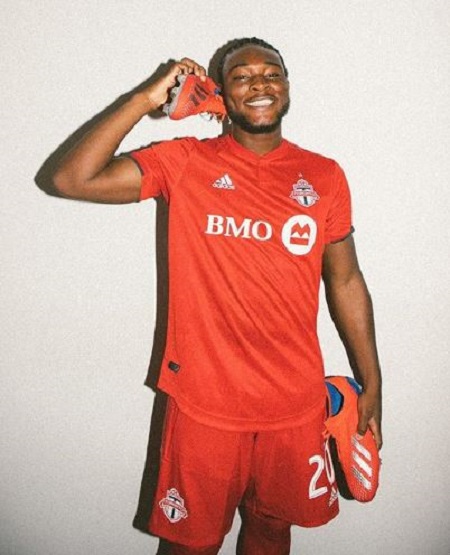 The public is always curious to know love life when one gets into the limelight. However, a young footballer, Akinola has maintained a low key personal life. There is no information if he is involved in the relationship or is still single.

Seems like the hunk prefers his personal life private and really far from the media's eyes. For now, he is focused on his career.

Born in Detroit to Nigerian parents, Akinola was raised in Canada, Toronto. His family relocated to Brampton, Ontario as a child where he grew up alongside his younger brother Tom who is now a member of the TFC Academy and has attended a Canadian under-14 camp.

A product of the TFC Academy, Akinola joined the Toronto FC II for the 2016-USL Season. On 15th June 2016, he made his debut in a 1-1 draw with FC Montreat. On December 18, 2017, Akinola signed MLS side Toronto FC as a homegrown player, becoming the 15th player to graduate from the TFC Academy and sign for the senior team, as well as the 34th academy graduate to ink a professional contract for one of the Toronto FC teams.

On March 17, 2019, Akinola scored his first-ever MLS goal in Toronto FC's home opener against the New England Revolution. On 13th July 2020, he recorded his second and third goals for Toronto in the MLS is Back Tournament in a 2-2 draw over D.C. United. In the team's 2nd match, he scored a hat trick against the Montreal Impact playing alongside Alejandro Pozuelo.