Awak Kuier was born on August 19, 2001, in Cairo, Egypt. She is the daughter of Sabit Kuier and his wife, Margeret Kuier. Her family left Douth Sudan to escape the country's ongoing civil war and opted to immigrate to Finland to pursue a better education for Kuier and her four brothers. She has not shared a word about her education and academic qualification. Awak Stands six feet and five inches tall and weighs more than 70 kg.

Awak's Journey from Finland to WNBA Overall Second Round Pick 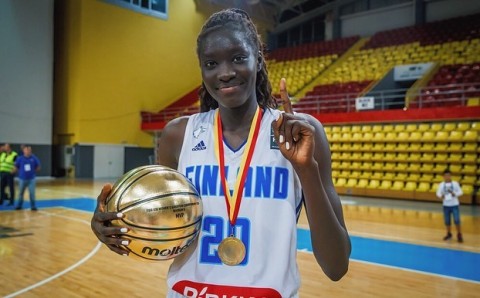 In 2020, Awak turned professional and joined Passalacqua Ragusa in the Italian Leagues. IN her first season, She played twenty-four games averaging 8.9 points, 6.8 rebounds, and 1.5 blocks. In early 2021, The player listed her name for the 2021 WNBA draft. Dallas Wing's drafter her in their overall second round. Dallas Wing's drafted Charlie Collier in their First Round pick.

Kuier and Wings must have signed an agreement, but none of the party has spelled a word about the contract to the public.

Who Awak Kuier Dating? Know About Her Relationship and Her Boyfriend

Awak is very much private about her personal life. She has become successful in keeping her personal life away from the reach of the media. Kuier is an active social media user and keeps posting only her photos. Following her posts, It seems like, The player is single as of early 2021.

Awak has an estimated net worth of more than $50,000. She played basketball in the Italian Women's basketball league for a season. Recently, Dallas Wing's signed her in the second-round pick. The average salary of a Rookie player is more than $100,000 in the WNBA. She is among the high-rated player in the league and shall be making much more.