Aurelien Tchouameni is a legendary football player born in France who currently plays for Real Madrid and his home country team, France's national team. Further, the footballer is positioned as a defensive midfielder, but he also has a mastery as a central mid-field.

Aurelien Djani Tchouameni, famous as Aurelien Tchouameni, is a professional level footballer who has amazed people with his excellent football skills and techniques. Besides that, he wears jersey number 18 for his fellow club and has earned 12 caps as of now. Similarly, he is a right-footed footballer who plays under an ESN agent.

Tchouameni is one of the club's most valuable and most liked players, Real Madrid. Likewise, he started playing professionally in 2017. Since then, Aurelien's professional career has become the most talked about topic as he is also the most paid French footballer like Edouard Michut. The latter has an estimated net worth of $100,000 and a market value of €2.00 million.

Further, Tchouameni's net worth is millions of dollars, which is $ 5 million- $ 10 million; however, the exact sum remains under study as the professional hasn't shared it publicly. While looking at his personality, Aurelien has well maintained his lifestyle and is a career-focused who loves keeping himself busy with training and sports activities. 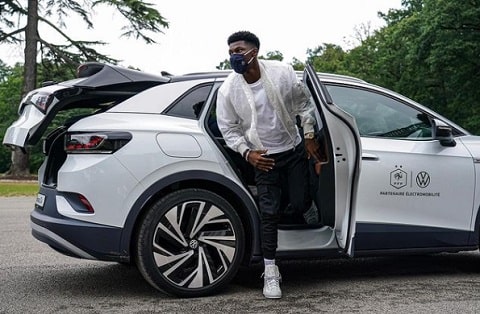 Like this, Tchouameni is a massive fan of automobiles and has a great collection of cars. After a detailed survey, we found out that he has a car like Volkswagen Touareg and Renault Mégane; hence, his car collection has made his fans wow every time.

Coming up to his market value, the French footballer has a market value of €60.00 million as of May 30, 2022 updates which is also one of his highest values so far.

Real Madrid's player, Aurelien, is possibly single for now as he has maintained high secrecy about his dating life and doesn't like to flaunt his career openly on web sources. Similalry, we found no clue about his past love life, so it can be said that Aurelien has a clean history as he has also not been rumored to be linked with any women so far.

Further to this, Aurelien is a private-natured personality who keeps his presence away from the media sight and likes to keep his life simple and straightforward, which might be the reason behind no information about his partner. Many of his fans assume he might be seeing someone behind the public attention; however, the exact details are not provided yet, so we can't conclude without knowing the truth. Hence, Aurelien's fans must wait some more time to explore his lovelife unless he feels comfortable sharing it publicly.

A true football fan is familiar with the name Aurelien Tchouameni. Furthermore, he is a professional level football player with more than fifteen years of experience in the vocation and kicked off his early career in it. While exploring his bio, we discovered that he started his early career in the football vocation in 2006.

Likewise, Aurelien always wanted to be the best footballer, and his childhood dedication made him one of the best and most renowned football players in France and worldwide. For your information, he began his early career as a footballer in 2006; playing for several clubs like SJ D'Artigues and Bordeaux, the right-footed player had a fantastic youth career in the vocation. 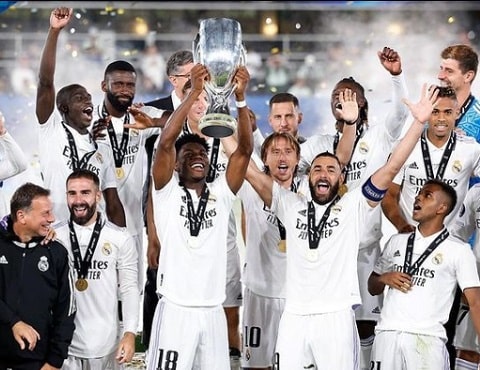 Aurélien Tchouaméni and his team after a winning a match at Helsinki Olympic Stadium SOURCE: Instagram @aurelientchm17.com

In 2017, he made his senior career debut for the club Bordeaux by playing UEFA Europa League in the second qualifying round on July 26, 2018. Further, he started playing for a professional football club based in Monaco, Monaco, where he signed a four-and-a-half-year deal with the club. Additionally, on 2022, he started appearing in the club Real Madrid, which is a Spanish professional football club.

According to the sources, he had a six-year contract with the club with a transfer fee of €80 million, which could grow to €100 million due to additional fees.

On August 26, 2021, Aurelien was first called to the national team.

The France Born footballer Aurelien was born on 2000, and he celebrates his birthday on January 27 every year. Furthermore, his birthplace is Rouen, Seine-Maritime though he spent most of his boyhood in Bordeaux, Gironde.

Talking about Aurélien's family background, he is the son of Fernand, a pharmacist who works as a pharmaceutical industry manager, and his mother is a senior education advisor. However, her name is not exposed yet. Besides all, his father introduced him to football at a younger age. 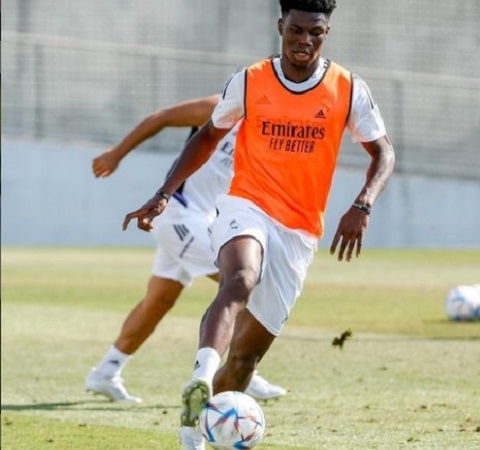 In addition to this, Aurelien's birth sign is Aquarius. Apart from this, he hasn't shared much about his private life due to privacy concerns. So, while exploring his physical appearance, the French footballer is 6 feet 2 inches or 1,87m tall, and many of his fans are great fans of his towering height.

Despite his fame, the player has chosen to remain silent regarding his family and bloodlines. Similalry, we have no idea if he is a single child or has siblings as he has kept his sibling's individuality hidden from the public reach.

Many of his fans are curious to reach out to Aurélien on social media platforms, so we are here to let you know that he is active on different social media handles like Instagram and Twitter; but Aurelien is mostly active on Instagram where we can follow him under the username @aurelientchm17.

On top of that, Aurélien has more than 1.9 million followers. Similalry, the player often shares his posts and stories online with his fans. Additionally, Tchouameni majorly enjoys sharing the football content more than anything else.